Hooters, the big national franchisee of bars and eateries whose business model is based on a young female wait staff dressed in distinctively revealing outfits, has been making some big headlines in San Diego news media and among rightward leaning talk show hosts. 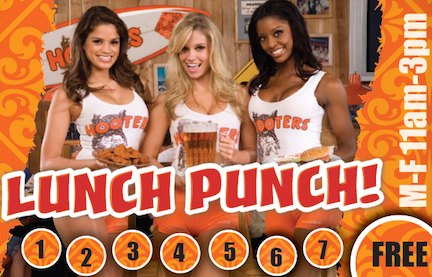 The story got rolling when Glenn Beck, the famously conservative cable TV talk show host let go by Fox News, somehow got the idea to urge his listeners to post signs he touted on his show and via his website:

Glenn put out a call to San Diego business owners asking them to show Mayor Bob Filner that we will no longer stand for his harassing and abusive behavior by posting a “No Service” sign in their store window.

Among the first to comply were Hooters restaurants here. 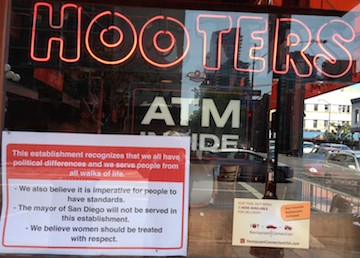 Fried wings, politics, and alleged wage and labor violations on the menu right inside

And among those to pick up the story were Slate.com and "The Conversation," a Twitter-based column run by U-T San Diego, the newspaper, web, and cable TV mini-media empire run by GOP La Jolla real estate developer and hotel mogul Douglas Manchester.

Melissa Fry-Sagermark, director of marketing for HootWinc, the west coast Hooters franchise, told Slate: "The signs went up at our four locations in San Diego this morning."

"It's not a political move for us in any way, shape, or form. We're strictly taking a stand for the fair treatment of women. At our franchise alone, we employ 1100 beautiful, talented women."

At the Oceanside Hooters, manager Lorenzo Soto told U-T San Diego reporter Mark Walker that the large notice went up when the store opened at 11 a.m. Tuesday morning and customers quickly took note of it.

“We’ve had a lot of positive reaction from customers, and our employees particularly appreciate it,” Soto said.

As it turns out, Hooters franchise owner Hootwinc, Inc. may not necessarily be such a paragon of virtue when it comes to the treatment of its female workers, at least not according to the testimony of former and present employees in a long-running law suit against the chain in San Diego Superior Court.

Filed in December 2009, and subsequently consolidated with two other cases against Hootwinc and multiple Hooters-related corporations and partnerships, the allegations have been slowly making their way through the halls of justice, held up in part by the failed efforts of Hootwinc's attorneys (labeled by one plaintiffs' attorney "retaliatory and illegal") to force the matter into arbitration.

Hooters headquarters in Atlanta franchises more than 450 restaurants, and "insures that the element of female sex appeal is prevalent in each of the Hooters Restaurants; the 'nearly world famous' Hooters Girls are the cornerstone of the 'Hooters concept' and the 'Hooters system' at each of the Hooters Restaurants including those franchised by HOOTWINC," says the plaintiff's amended complaint of November 2010.

Judging by the allegations made in the lawsuit, the chain has operated as a veritable super-Glam sweatshop for its legions of young female employees, forcing them to buy their revealing costumes from an on premise vending machine and firing them at will for having a bad hair day.

Among other accusations, "Hooters Girls must come to work 'camera ready' and in uniform," in order to better impress the largely male clientele and apparently stimulate them to buy more booze and chicken wings.

"Pantyhose are to be worn at all promotions. The only color to be worn is Suntan. You may go a shade darker if your skin color is darker than the Suntan pantyhose color.... Tight or other forms of leggings are not to be work. If the pantyhose run or snag, they must be immediately replaced with a new pair in order for you to continue your shift."

Because Hooters Girls may only wear their uniform at work, Hooters Girls must prepare themselves to be camera ready (hair, make-up and uniforms) at their homes and arrive at the store covered-up and all ready to work.

Prior to each and every shift, [employees] begin the elaborate process, off-the-clock, of styling, primping, combing, brushing, washing and dying their hair into a "glamorous appearance," which is determined at the sole discretion of Defendants' management.

The workers "also had to carefully apply, brush, rub and contour their makeup, off-the-clock, to meet Defendants' standards to such a degree that their makeup would be impervious to camera-glare and not be oily, shiny and ‘not to extreme, nor too minimal,’ as stated in the Employee Handbook.”

Those revealing outfits allegedly require plenty of time to put on and take off, which the lawsuit alleges was not compensated for:

A minimum of 45 minutes daily was spent donning and another 15 minutes of work time was spent doffing Hooters required uniforms and image standards.

All of this work was unpaid "off-the-clock" time, as Defendants did not permit Represented Employees to be on the clock and paid for this time.

In addition, the suit alleges, the waitresses are not given adequate lunch breaks, in part because they are carrying so much company cash that could apparently make them a mark for nearby robbers.

Each Hooters Girl [is] fully responsible for the cash she is holding in her Brown Hooters Pouch.

Defendants do not provide Hooters Girls with any safe place for the cash they are holding should they desire to leave the premises for lunch.

Defendants have therefore implemented a de facto requirement that Hooters Girls may not leave the premises for lunch.

The allegations also assert that Hooters has been cheating employees out of their pay.

Alterations to Class members' time punches have been altered to give the appearance that they were paid for all hours worked and took all breaks when in fact they had not.

Other Hootwinc Hooters establishments have been the target of previous legal complaints, including those made in 2004 that a Pasadena manager had spied on and videotaped employees as they were dressing.

That August the manager, Juan Martin Aponte, was sentenced to five years in prison and required to register as a sex offender, according to an account in the Pasadena Star News.

"You defiled the rights of these young ladies,” [Judge Mark] Nelson told Aponte, who turns 33 on Saturday.

"You disgraced your wife, your family, your children.”

The next hearing on the matter is set for August 29.

Members of the firm have been major political backers of Republican Carl DeMaio, who lost out to Democrat Filner in last year's mayoral race.

We have calls into the principals for further details.

But but they respect women, gosh darn it! That's why they banned Filner. Oh wait, it was just a publicity stunt, wasn't it?

Talk about the pot calling the kettle,....you know?! When I heard about this I really couldn't stop laughing! I was at the Hooters when someone showed me the flyer. I almost began choking on my hot wings when I concocted a plan that involved me ah, er well,...choking, falling to my knees, whilst a bevy of buxom babes came to my rescue some performing the Marvin Hamlish maneuver, others administering tantric oral breathing techniques and then it hit me. I am no better than Mayor Filner! So I promptly kicked my ass out of that den of virtue and respect for women. I guess I showed me, and Mayor Filner that we've had enough!

Laugh all you want to. More businesses need to put the same signs up and refuse business to Mr. Filner. (I refuse to call him Mayor). First of all, if he treats women in his workplace this way, how would he treat someone who is "waiting" on him? And secondly, "money talks". We as a community need to get together PUBLICLY and make sure this man is persona non grata everywhere he tries to show his face.

Ros: I think fatcat's point, also made in the article, is that Hooters is at this moment being sued by women for not respecting them. That's why he laughed. You know the saying, charity begins at home? And another, let he who is without sin cast the first stone? People are imperfect, but Hooters' ploy is ironic, you must admit.

rosijoni:You exemplify the dense-ness and/or extremism the city is up against, as you back other main/major offenders in this city to denounce only one. BTW: courts are for pronouncing judgment.

Did you read the article? Do you recognize what the connections are and what they mean for the city's citizens and communities? Does it bother you that I refer to you as dense based on your one comment? Should anyone's opinions or statements about you be accepted as truth just because they were uttered and should they be broadcast everywhere in order to defame you, attempt to break you and cast you out?

That is absolutely un-american but it's more and more where America is going. Traitors.

Expect to see more Businesses ban against Mayor Filner in the hopes of courting (pun intended) the BIG Businesses that are pushing to control $an Diego!

You mean $an goDie, right?

If they're "underpaid" or "poorly treated" or the dress code is too onerous... I have a really crazy idea! We'll pass a law to allow them to quit! We can send in the police with lock cutters to break their shackles and release them! Maybe if we all work really hard, we can give this option to the prisoners trapped in bad jobs!

T-ts & Shi-ty Bar Food (I refuse call it Hooters) won't serve Mayor Filner. It's a good thing that a chain named in honor of a derogatory term for a woman's breasts is taking a stand against sexism.