After an unexpectedly long meeting behind closed doors early this afternoon, five of the nine members of the San Diego Tourism Marketing District finally emerged to announce they had voted to approve suing Democratic San Diego mayor Bob Filner in an effort to force him to sign a contract authorizing a $30 million-a-year tax dollar deal negotiated by previous GOP mayor Jerry Sanders. 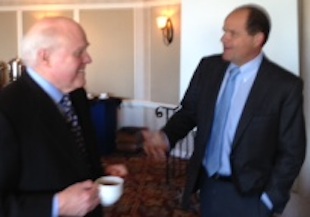 No details - other than a one-page statement - of the two hour discussion of the possibly historic vote that could cost local taxpayers a sizable amount in legal fees was provided by the board.

Only one member of the board was willing to speak to the media following the decision, and that was via a statement he read before a television camera after the group emerged from its lengthy non-public meeting.

"I would like to inform you that the corporation regrettably authorized filing a lawsuit today in superior court to compel Mayor Filner to sign the contract with the City Council approved last year with the TMD," said the statement, read by board chairman C. Terry Brown, president of Mission Valley-based Atlas Hotels.

We've filed this suit in the interest of protecting and preserving a partnership with the City that has served our industry and tourism employees, and the many small businesses that work with the tourism and hospitality industry - as well as the City of San Diego and the regional economy.

We look forward to resolving the contract execution problem expeditiously, and moving forward in our efforts to build on past successes and reap the economic, social, and cultural benefits of TMD's collective marketing efforts.

After he finished reading, Brown declined further comment and left the room, as did his colleagues. Agency counsel John Lambeth also declined to be interviewed by those present, including a TV reporter, and quickly departed.

The district's statement brought a swift retort from the mayor, who released his own statement early Friday evening:

As Mayor I cannot and will not allow a small group of wealthy hoteliers to hold our economy hostage to their personal agenda of secrecy and greed.

Members of the tourism board have been closed-mouthed about their pending decision ever since it was made public here on Tuesday.

According to board treasurer William Evans, president of Atlas-competitor Evans Hotels, who left today's board meeting before the closed session began, some of his fellow board members were not eager to be quoted because they were employees of corporate hotel chains and feared the publicity and negative job consequences such interviews might bring.

"These guys are in a really tough spot," Evans told us.

Today's board meeting was held at the Bahia Hotel, a property run by Evans Hotels on city leased land.

Everything for the hotels used to be a quick slam-dunk, under Mayor Sanders. A bit more difficult now under the new strong Mayor to get their pet programs paid for by "others" - e.g., big PR and advertising contracts for their friends.

Who are these PR firms involved with this huge contract? Is it Mitrovitch again? I always wondered about these big PR contracts like the $1,000,000 contract to change the name of the San Diego Bay to "The Big Bay". Some PR firms are making huge money from the city and I am glad the new mayor is looking into it.

Just a few of the PR firms that make $ from the downtown groups, and some of the people:

The Mission Bay hotels have essentially private beaches. How easy is it for the public to get access to them? At the Catamaran, you can park somewhere else and walk on over. I don't quite see dragging beach chairs, kids, beach balls and sand toys through the Catamaran lobby. What is the status of public access to these hotel beaches?

The "board members were not eager to be quoted because they were employees of corporate hotel chains and feared the publicity and negative job consequences" ...

Good idea, and thanks for the suggestion, Bill Evans: I will write/email the hotels' corporate HQs and complain about all of the signers of the agreement to sue my mayor and my town.

These guys -- voting and non-voting -- should be called pirates, not "hoteliers."

Isn't Evans the one who gets long-term leases from the City for his strategically-placed hotels? Like the pseudo-Deco Inn at Torrey Pines at the southern corner of Torrey Pines Golf Course? And the Bahia Hotel on the sands of Mission Bay -- where another long-term lease was approved hastily by City Council last Fall just before Mayor Bob Filner took office?

In the Feb 24 UT, Goldsmith is quoted as saying "Here, the mayor of my client city proposed an agreement to give the city part of the TMD funds as an inducement to get his signature on the TMD contract."

This is an incorrect summary of Filner's position. Filner, recognizing that the legal validity of the 2% surcharge on hotel bills is tenuous, doesn't propose to "give the city" any of the surcharge already collected under the current contract. Rather, Filner wants only to sign a new, more time-limited contract (1 or 2 years, the likely timeframe of the legal battles) to release the already collected surcharge fund. A new contract could agree that some of the surcharge could be shared with the General Fund. Why not? The TMD Board is costing the City money by suing.

The legal challenges involve not only laws on the proper process of imposing a surcharge (tax law or assessment/fee law), but also the legal time limit (max 5 years) to impose a surcharge.

Signing a contract for 40 years, which violates one State law, is an issue. Filner, in renegotiating a potentially legal shorter term assessment, while legal challenges are heard and decided, also wants an agreement that all of the specially benefiting hotel corporations will pay hotel staff a living wage.

If the court decides that assessment law has been violated (even Goldsmith concurs this is likely), the TMD can be reintroduced legally, by public vote, as a tax, and part of the vote would be that the City would receive part of the new tax.

It's going to be impossible for the court to find that the hotel corporations are the payors of an assessment, though they are the direct beneficiaries, by their own claim, in violation of law. The SDTMD (EIN 262646009) is organized as a nonprofit 501(c)6. Their mission statement on their IRS filing is thus: http://tinyurl.com/ag8wkmf

SDTMD IS A FUNDING CONDUIT FOR THE DEVELOPMENT AND IMPLEMENTATION OF EFFECTIVE MARKETING PROGRAMS AND SERVICES THAT BENEFIT THE ASSESSED BUSINESSES WITHIN THE SAN DIEGO TOURISM MARKETING DISTRICT.