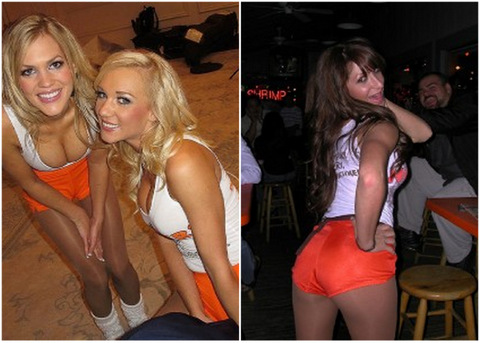 "We are here to serve your food and beverages in a polite and friendly manner."

"No doubt, some people were surprised when we decided to ban Mayor Filner from our establishments," says Caesar Canz, Brand Manager for the restaurant chain formerly known as Hooters. "But we stand by what we said."

What they said was, "This establishment recognizes that we all have political differences and we serve people from all walks of life. We also believe it is imperative for people to have standards. The mayor of San Diego will not be served in this establishment. We believe women should be treated with respect.”

That belief also led to the restaurant chain's decision to change its name from Hooters to Breasts. "Look, our waitresses are going to be ogled," says Canz. "We know that. Our customers come to us as much for the firm, succulent breasts of our waitstaff as they do for the firm, succulent breasts of chicken that they serve. And as long as the girls consent - and they do - that's okay. What's not okay is the degrading slanguage we have been using to describe our product. You wouldn't go to a breast augmentation clinic called Dr. Jim's Jumbo Jugs or Dr. Phil's Fine Funbags. The Mayor's misconduct made us realize that it was time to treat our girls like the professionals they are, and to be upfront about the way we objectify them. After all, they're up front with us, if you know what I mean."

"One thing I will admit that the Mayor got right, though," concluded Canz, "the girls really do work better without panties."

Just call it BOOBS and quit trying to kid everybody. If Filner stands up to special interest - sounds like a pun - could be saving grace - but that will never happen.