Man driving Honda was said to be drag-racing on freeway

A 21-year-old man who investigators say drove in speeds exceeding 100 mph, and crashed his car killing the passenger in his vehicle, has been charged with murder.

Jorge Lopez was pursued by CHP officers after midnight, in the early morning minutes of Friday November 16, because he was allegedly drag racing his Honda on Highway 78, according to authorities. Lopez chose to evade officers with felony reckless driving, a prosecutor said, when Lopez drove west on 78, then took northbound 5 and then exited onto Mission Avenue in Oceanside. The high-speed chase ended after Lopez’ vehicle reportedly struck a parked Ford truck and then came to rest in the 2600 block of Mesa Drive, according to authorities.

Prosecutor Patrick Espinoza said Jorge Lopez has been charged with murder because he already has one alcohol-related driving conviction in 2011, after three traffic violations in year 2010. The traffic violations were all for speeding, two notably over 100 mph, the prosecutor said. Sheriff's records indicate Lopez has at least two prior convictions for reckless driving, one on a suspended license.

Superior Court Judge Marshall Hockett ordered $2 million bail on the current charges,and then declared the defendant “no bail status” for his prior convictions.

Lopez is next due in San Diego’s North County Superior Courthouse on November 30. 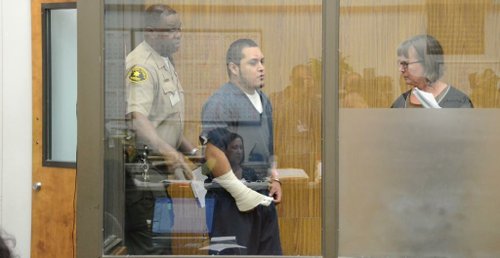