Escondido man on trial for murder after head-on collision

An Escondido man is on trial for murder, after he allegedly caused a fatal head-on collision driving a stolen car on the wrong side of the road, while high on heroin.

Jurors began hearing evidence this morning, in a trial for Jose Raul Najera, 34.

San Diego Sheriff’s deputy Nathan Rowley said he pulled his patrol car behind a stolen Ford Focus about 9 a.m. on a Wednesday morning, and there was “a lot of traffic going by at that time.” It was near the intersection of Cole Grade Road and Valley Center Road, in a rural area of San Diego’s North County.

Deputy Rowley said “I activated all my lights” and the stolen car fled west in the eastbound lanes of Valley Center Road. The deputy said the pursuit lasted less than sixty seconds before he witnessed a “mushroom cloud of plastic” at the moment the fugitive Ford collided with an oncoming Subaru.

When the deputy approached the smashed Ford, he said Najera was unconscious behind the wheel.

A paramedic who testified this morning said Jose Raul Najera told him he had used heroin and methamphetamine before the crash. The paramedic said he did not administer painkillers to Najera during his ambulance ride, the explanation was unfathomable.

Prosecutor Laurie Hauf alleges the defendant has seven prior felony convictions in San Diego County, beginning the year he turned 20. The prior offenses are listed as burglaries, theft, drug charges, conspiracy, and criminal street gang crimes. The allegations include five “prison priors” and two “strike priors,” and the prosecutor is pursuing this as a “Three Strikes” case.

Deputy Rowley is expected to continue his testimony before the Honorable Kathleen Lewis tomorrow morning, February 28, 2013. 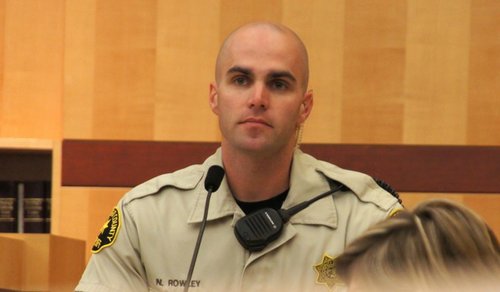