Did not beat girlfriend, nor try to run her over, nor flee officers with wanton disregard

Kenneth Wayne Welch, 42, got into an argument with his girlfriend while they were in a car and he grabbed her by the hair and pushed her head into the center console, a prosecutor told a judge today, June 20, 2013.

Welch then used a “weighted sap” to beat the woman about the head and face “while saying that he was going to kill her,” prosecutor Keith Watanabe alleged.

The woman escaped the vehicle and fled on foot, according to the prosecutor. “She went down the road and the defendant began to drive the car at the victim while she had to jump out of the way, and the defendant was saying he was going to kill her.”

The alleged victim had been dating Welch, a parolee, about a year and a half, and they have a five-month-old son together, according to Watanabe.

San Diego County Sheriff’s deputies pursued Welch in a high-speed chase, he “was driving recklessly until his car finally crashed,” the prosecutor alleged.

The incident reportedly began on the La Jolla Indian reservation near Valley Center, and ended with a car crash in the community of Vista, also in Northern San Diego County. Deputies arrested Welch that same day, June 18, 2013.

Prosecutor Keith Watanabe said that 42-year-old Welch has already been convicted of “strike” felonies in 1997 and 2001, and therefore faces 25-years-to-life in prison if he is convicted of a new violent felony. Welch’s past crimes appear to be robbery and assault and felony intimidation of witness, according to public records.

Prosecutor Watanabe told a judge today: “The defendant has told (the victim) in the past, that he has two strikes on his record, and so he doesn’t care what happens to him if he goes down for something again.”

Judge Marshall Hockett set bail at $1 million, and issued protective orders for Welch’s girlfriend and infant son, who is named after him. Welch is next due in San Diego’s North County courthouse on June 28, 2013. 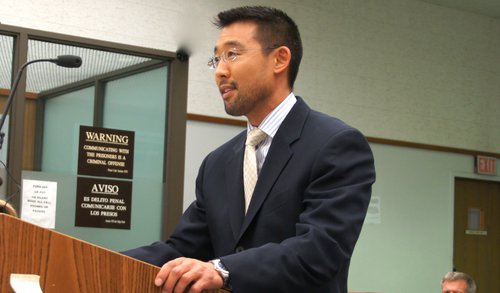