“2012 is a mystical time for the world, so we wanted to build one of the wonders of the world,” Cosmic Family promoter Christophe Lobe, a project manager behind the Basshenge sound camp, told The Reader in January.

As such, a group of volunteers from across the country is building a life-size (150 feet in diameter) Stonehenge replica for this year’s Burning Man art and music festival in Nevada. The structure will be powered by 100,000 watts of sound, over 120 LEDs, pyrotechnics, interactive art, and circus performances on the 2000-person capacity dance floor.

“Somebody built a ‘henge in ‘04 and burnt it afterwards, but we're going to take this on tour around the country,” says Loeb. “Our goal is to supply jobs and to be of service to local and cross continental promoters.”

To fund the project, which will be fabricated in Chula Vista, Lobe and project partner Per-sep-sion have run Kickstarter and IndieGoGo campaigns in addition to a series of fundraiser parties. Tomorrow night’s Basshenge fundraiser at Ruby Room promises to be well worth the $10 cover ($8 presale).

Last time I saw headliner DJ Swamp (who has collaborated with a slew of artists including Beck, The Crystal Method, Katy Perry, Supreme Beings of Leisure, Kid Rock, The Bloodhound Gang, Morcheeba, The Dandy Warhols, DEVO, Save Ferris, Say Anything, The Dust Bros, Kool Keith, Sticky Fingaz, Better than Ezra, and Vanilla Ice), he ended a long set of turntable theatrics by lighting his vinyl on fire and tossing it into the audience. 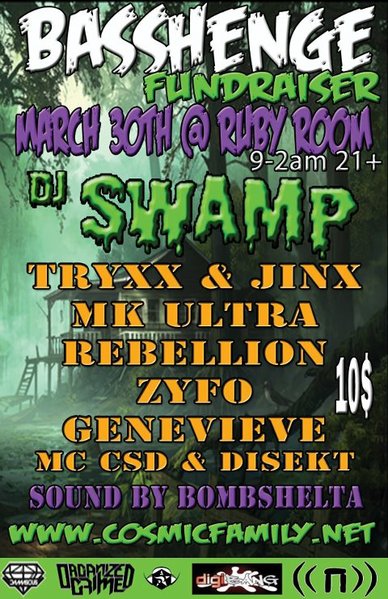