“We all grew up on Nintendo and Star Wars,” Nerdcore night and Tiny Nightmare promoter Aubree Miller told The Reader in May.

In the past year-and-a-half or so, Nerdcore Night at the Ruby Room (1271 University Avenue – Hillcrest) has welcomed geek gods such as MC Lars, MC Frontalot, and Dr. Awkward.

“This past September there was controversy brewing between the two groups of characters [Marvel vs. DC Comics] and they stripped down and duked it out in LA,” Miller writes.

“But some felt cheated and they are ready for a rematch!"

Scarlet O'Keljus as The Joker vs. Sin Fisted as Venom

Dixie Demure as Rogue vs. Annie Mae as Power Girl

Kitty Cadillac as Catwoman vs. Christina Fuentes as Punisher

Science Fiction Jazz will open with groove-oriented funk jams from 9:00 to 10:30. 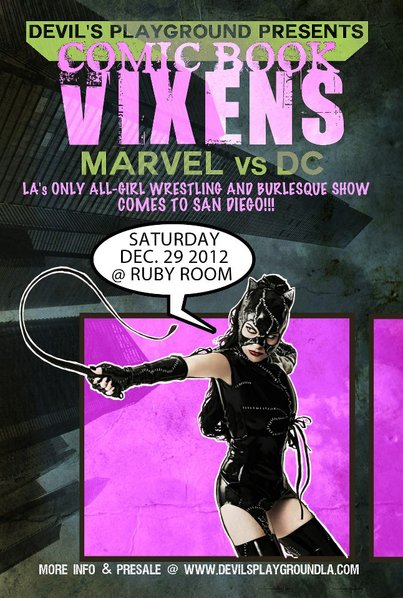