San Diego’s drum and bass/jungle scene has caught the attention of filmmakers behind The American Jungle, a feature-length documentary that explores U.S. and Canadian subcultures spawned by a high-energy, Amen-break-based genre of electronic dance music that originated in London around 1992.

On Saturday, May 18, The American Jungle will be filming at The Ruby Room (1271 University Ave. – Hillcrest) to document the multi-genre EDM monthly SD Union, a drum and bass-centric event hosted by MC Ridda, Subliminal Sound System, and Ruby’s Sean Cute, a.k.a. junglist DJ Hannibal Selektor.

The night features Prague-via-DC headliner Hybris - a MetalHeadz and Dispatch artist formerly known as Robot Death Squad - who has collaborated with drum and bass dignitaries such as Noisia and Rido to create dark sci-fi beatscapes fit for the weirdest of cyberpunk acid visions. 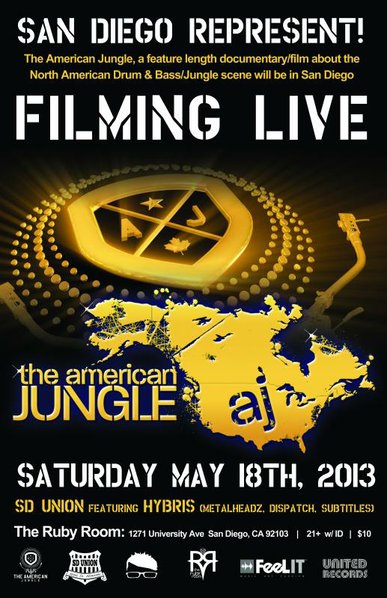 Thanks for the blog love! here are photos from the night! It was a great night! Next one is June 15th triple bday bash for Whizard, Osal8 & Eric Yo