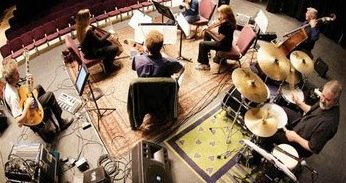 Having just returned from a week-long tour of Japan, with vocalist Dianne Reeves, guitarist Peter Sprague is set to perform the world-premier of "Dr. Einstein's Spin," a piece commissioned by Chamber Music America as a part of their New Jazz Works program, with his jazz trio meets string quartet ensemble, The Peter Sprague String Consort, Dec. 2, at Athenaeum Jazz at the Studio, 4441 Park Blvd.

"I applied to Chamber Music America" twice, and the first time, in 2009, I didn't get it," says Sprague, adding, "They were really cool about answering questions, and I found out I did really well with the music I submitted, but they weren't too impressed with the writing part of the grant application. So, I really went into a lot more detail the second time around, and got the commission in 2010."

The commission-grant, which paid the guitarist about $22,000, covered the writing of "Dr. Einstein's Spin," which Sprague describes as "Pretty epic. I took a whole month to write it, and I'm just hearing the fruition of all that work this week. It's the first time I've gotten to hear all of the parts live, with real musicians. There are some parts that are close to impossible to play, but we will get it all worked out in the next two rehearsals."

Everyone in this group is constantly working, so for Sprague, "The absolute hardest part of the String Consort is finding a date, whether it's for a rehearsal, performance or recording session, where everyone is available."

"Dr. Einstein's Spin," is: "About 30 minutes long, it's in three movements, the first is called Molecule, and it's got some crazy stuff in it, the second is kind of peaceful, Rainbow, is it's name and the third movement is The Expanse," said Sprague.

The commission also covers an additional performance later at Cal Arts in Valencia, and the recording of the piece which will be documented at Spragueland Studios, the guitarist's state-of-the-art studio in Encinitas.

Chamber Music America is mostly concerned with advancing classical music, but their New Jazz Works program awards about six grants a year. Previous recipients include the Los Angeles based pianist Billy Childs, and San Diego musician Geoffrey Keezer. The judging panel conducts a "blind-listen" to three works by each applicant, then reviews the grant-proposals and votes.

You can experience this premier performance on Friday, Dec. 2. Tickets are $26 general public, $21 Athenaeum members. Downbeat starts at 8 p.m.