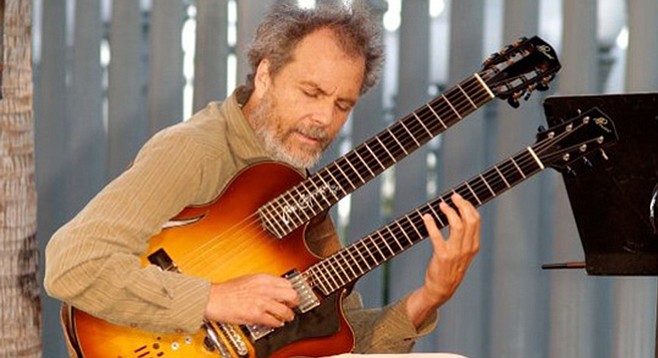 Peter Sprague's not done, but he'll take the award

When is the right time to honor a lifetime in music?

“That fellow named Kevin [Hellman], who is in charge of the awards, called me about a month ago and said they’d like to do that,” says 59-year-old jazz guitarist Peter Sprague, on the phone to discuss his Lifetime Achievement honor at this year’s San Diego Music Awards ceremony, to be held at Humphreys by the Bay on October 5.

“It’s a great honor, but I’ve always thought of it as going to people toward the end of their careers — so maybe I thought it was a little premature. Then again, I’m pretty old — I’ll turn 60 in October, even if I don’t feel it. So maybe everyone feels like they may be getting it too early. I did start out really young, and I’ve been dedicated to staying here in San Diego, and you know I’m in pretty good health, so it’s not as if it’s over yet.”

I asked Sprague if he’s already working on his acceptance speech. “You know, the funny thing about that event is that there’s a bit of a party going on in the back, and I’ve seen some speeches really just fizzle out because there weren’t a whole lot of people listening! But I like to improvise, so I don’t think I’ll need to put something on paper other than to say that I love living here, and I hope to keep on creating music. After all, you need to brace for an early exit — it’s sort of a speech that is oriented to an inebriated audience!”

The local music community has seen big changes since Sprague made the scene in the mid-1970s. “When I got started, we used to get these month-long gigs where you’d set up your gear and you could really hang out for months,” says the guitarist. “That just doesn’t exist anymore — but I’m so happy that I came up in an era where it did, because that’s a really neat way to refine your art.”

Like most jazz musicians, Sprague has felt the pull from the Big Apple. “At one point I lived in New York, and I got a taste of what that was like...but for me to feel right, I need more than just a bunch of great places to play — I need a great place to live and be a human being, and for me, San Diego has that balance.”