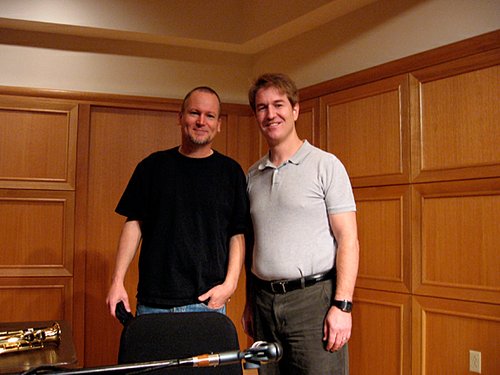 Brian Ross, the Programs and Events Manager for UCSD, is putting together a truly magical double-bill performance at The Loft, on April 4, featuring the Peter Sprague Quartet, with special guests the Jeff Kaiser Quintet opening the show.

Sprague needs no introduction to those following the San Diego jazz scene, even still, this quartet performs rarely, and when it does, it's always special. Featuring Tripp Sprague on reeds, Gunnar Biggs on bass, and the redoubtable Duncan Moore on drums, the guitarist will be highlighting a quartet version of his Chamber Music America commissioned composition, "Dr. Einstein's Spin," plus new material.

"I've written two new tunes a few weeks ago, 'Wall Street' and 'Chopin'. This is going to be a fun gig, especially with Kaiser's group in the loop," says Sprague.

I asked Ross how this unusual pairing came about.

"Peter called, seeking an opportunity to play at The Loft...the month of April offered an opening for him and the venue. Coincidentally, Jeff Kaiser was looking for a spring date as well. He mentioned a new project that would involve the Mattson 2--a popular and interesting concept, no doubt. So, naturally, I saw a great opportunity to co-bill an evening."

"This music is different for me. While having a lot of the expected elements of one of my performances, it also features four tunes !" says Kaiser, adding, "Should be a lot of fun, the rehearsals sure have been."

"Jeff's music for the quintet shows another side of his wide-ranging musicality. The set will move seamlessly through a number of his compositions that combine sections of fully composed melodies with groove-driven solos and more open ensemble improvisations. I'm not sure I would have thought of pulling together this particular group of musicians...but the chemistry really works !," said Borgo via e-mail.

"I'm looking forward to the spark Jeff's group will create, and how that may influence Peter's set of music. I'd like to hear how they, perhaps, pick up and take off from wherever Jeff's group lands...I'm also eager to hear more of David Borgo on saxophone. His last appearance at The Loft left a solo that will forever resonate greatness," said Ross.

Amazingly, this concert is free!

Either one of these bands playing a show would be an event. The fact that they are teaming up, at no charge, makes attendance a no-brainer. Concert begins at 8 p.m.