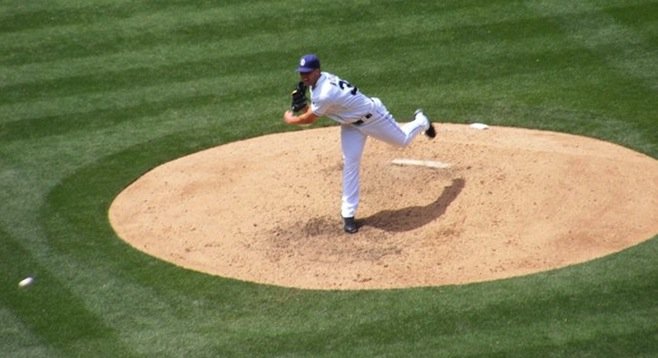 This big question with Carlos Quentin returning to the lineup on Tuesday was what effect the Headley – Quentin dynamic would have on the lineup as a whole. That question has yet to be answered, as pitching again fell apart early for the Padres and the bats weren’t enough at the right time and the Padres fell to the Brewers again, this time by a 6-3 margin.

With one out in the first inning, Jean Segura tagged a Clayton Richard slider to right field for a triple. Ryan Braun stepped in and hit a ground ball to shortstop for the second out, with Segura scoring on the play, and the Brewers went out to a 1-0 lead right away.

“They manufactured a run,” manager Buddy Black said postgame. “A triple with one out, and then a situational-hitting ground ball.”

With one out in the bottom of the first inning, Will Venable hit a shot to right field for a single and stole second base. Chase Headley drew a walk, and Carlos Quentin came to the plate for the first time in eight games to face Yovani Gallardo.

Quentin then singled down the third base line to drive in Venable with Headley taking third base. Yonder Alonso stroked a single to center field plating Headley, with Quentin taking third and the Padres took the lead 2-1 over the Brewers after an inning.

In the top of the second inning, Richard continued to be shaky with a lead-off walk to Rickie Weeks and then a double to Carlos Gomez to put Weeks at third base. Yuniesky Betancourt then singled to right field scoring both Weeks and Gomez and the Brewers were back on top, still with no outs.

Alex Gonzalez also singled, with Betancourt taking second base, but Yovani Gallardo struck out trying to bunt. Norichika Aoki laid down an excellent bunt and beat it out for a single, loading the bases.

Jean Segura hit a slow ground ball to third and was thrown out at first base, with Betancourt scoring on the play. Ryan Braun drew an intentional walk to load the bases with two outs, and Jonathan Lucroy doubled to left scoring Gonzalez and Aoki, and Clayton Richard was finished early.

“The Brewers had good hits against [Richard],” Buddy said after the game in analyzing Richard’s performance. “Taking the ball the other way, taking what Clayton was giving them. A couple of flairs, they dumped some down the right field line. The back breaker was Lucroy’s double, obviously.”

Richard wasn’t pleased with his overall performance. “It’s one of those outings where it’s a tough one,” he said postgame in the club house. “I had a few good pitches, they put the ball in play, and then when I did make mistakes they made the most of it. And then to go out and walk Weeks, that really hurt, that walk.”

Thad Weber relieved Richard and got Rickie Weeks to line out to center field, but the damage was done. The Brewers were up 6-2 over the Padres.

In the bottom of the second, the Padres tried to chip away at that lead. With one out, Nick Hundley doubled to left, and after Thad Weber hit a ground out, Everth Cabrera drew a walk.

Will Venable came up and singled to right field, driving in Hundley. After two innings, the Padres closed the gap to 6-3 against the Brewers.

Jedd Gyorko singled to open the bottom of the fourth inning and Hundley followed with a single putting Gyorko at second base with no outs. Thad Weber bunted but Gyorko was thrown out at third base on the fielder’s choice.

Everth Cabrera then hit a rocket off of Gallardo but right at shortstop Jean Segura, who easily doubled Hundley off of second. The threat was over and the Brewers held the 6-3 lead over the Padres.

Meanwhile, Thad Weber pitched 4 1/3 innings of scoreless, two-hit, one-walk ball while striking out four and giving the Padres a chance to get back in it. “I’m happy, that’s my job to eat innings and put up zeros if we’re in a situation like that. I was happy to be able to do my job,” Weber said.

In the bottom of the seventh inning with two outs, Yovani Gallardo issued consecutive walks to Will Venable, Chase Headley, and Carlos Quentin to load the bases. Tom Gorzelanny then replaced Gallardo and struck out Yonder Alonso and the opportunity went for naught.

John Axford pitched the eighth and Jim Henderson the ninth inning to pick up his fifth save of the season. Richard took the loss to fall to 0-2, while Brad Brach, Dale Thayer, and Huston Street pitched scoreless innings in relief for the Padres.

Brewers manager Ron Roenicke was ejected by home plate umpire Gary Darling in the bottom of the fifth inning for arguing a call on balls or strikes. Roenicke played on the 1984 National League Champion Padres team that went to the World Series, losing to the Detroit Tigers.

Buddy Black said that Kyle Blanks was fine after the game. Blanks wasn’t used in a pinch-hitting role on Tuesday as Black felt there wasn’t an appropriate opportunity to bring him to the plate.

Look for Thad Weber to perhaps be sent back down on Wednesday and a fresh arm to be recalled. Weber pitched outstanding but can’t be used for at least four to five days, and with starting pitching lacking length, relievers are taxed. It seems certain that Weber will be recalled at some point when needed.

On Wednesday, the Padres will try and take the last game of the series from the Brewers and snap Milwaukee’s nine-game win streak and snap their own five-game losing streak in the process. Edinson Volquez (0-3, 8.84) will face Marco Estrada (2-0, 4.50) for the Brewers. First pitch is at 7:10 PM PDST and the usual suspects will broadcast the game, 1090 AM on radio and televised by Fox Sports San Diego.