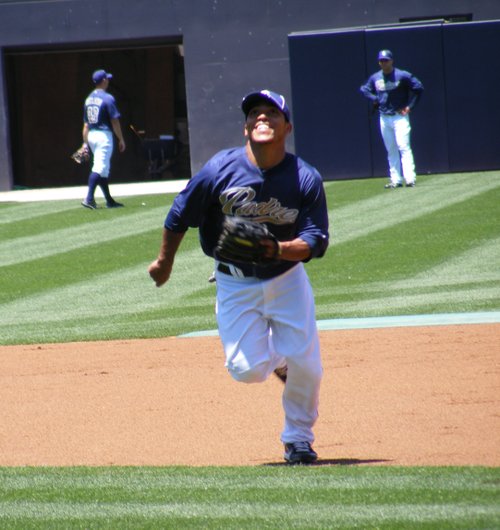 Unlike the first game of this three-game set on Tuesday night against the San Francisco Giants, the Padres fell just short on Wednesday afternoon and the Giants hung on for a 6-5 win. But it wasn't as though the Padres didn't have opportunities to pull the game out. They did.

Clayton Richard took the mound for the Padres against the Giants' Madison Bumgarner, and both offenses got some licks in early. In the top of the first inning, Richard was touched up for three runs before settling down a bit.

Gregor Blanco and Ryan Theriot both singled to open up the game, and Melky Cabrera hit a ground rule double to left field to score Blanco and the Giants quickly jumped out on top. Buster Posey then hit a sacrifice fly to score Theriot while Melky Cabrera tagged from second and took third base. After Angel Pagan grounded out, a passed ball by Nick Hundley allowed Melky Cabrera to score from third and the Giants led 3-0 before the Padres even came up to bat.

The Padres managed to get a couple of runs back in their half of the frame. Chris Denorfia doubled, and then with one out Chase Headley doubled home Denorfia. After Carlos Quentin grounded into a fielder's choice erasing Headley trying to take third base, Jesus Guzman tripled to plate Quentin and it was 3-2 after an inning.

Then both pitchers settled in until the fifth inning. Richard gave up a home run to Gregor Blanco in the top of the fifth inning and then Bumgarner gave up a shot over the left field wall by Cameron Maybin, and the score stood at 4-3 after five innings.

In the bottom of the sixth inning, the Padres wasted a golden opportunity. After singles by Quentin and Guzman and a walk by Forsythe, the Padres had the bases loaded with no one out. Nick Hundley then struck out, and Everth Cabrera grounded out, scoring Quentin. Yonder Alonso then pinch hit for the pitcher but popped out, and the Padres could only manage a run and they trailed 6-4.

Chris Denorfia tripled, and with one out was driven home on a ground out by Chase Headley, and the Padres only trailed by a run. But with one out in the bottom of the eighth inning, the Padres missed another opportunity when Forsythe singled to center. Nick Hundley's ground ball moved Forsythe to second base, and then Everth Cabrera walked. Mark Kotsay then grounded out to end the threat.

"We had a couple of chances and we couldn't capitalize, we couldn't get the big hit," Black said.

Clayton Richard took the loss to fall to 2-7 on the year, while Madison Bumgarner got the win to improve to 7-4. Sergio Romo of the Giants came in and closed the game out in the ninth inning to earn his third save of the season.

According to manager Buddy Black, Will Venable is feeling better every day. Venable is day-to-day with a pulled quadriceps. He continues to warm up daily with the rest of the team.

Jason Marquis, who was recently signed to a minor league contract by the Padres after being released by the Minnesota Twins, has been called up to the big club and will start tomorrow. The corresponding move to keep the roster at 25 players has not been announced, but is expected early on Thursday. The rubber-game between the Padres and the Giants is scheduled to start at 12:35, and Marquis (2-4, 8.47) will face the Giants' Matt Cain (6-2, 2.62). Fox Sports San Diego will televise the game, and radio XX 1090 AM will broadcast as usual.