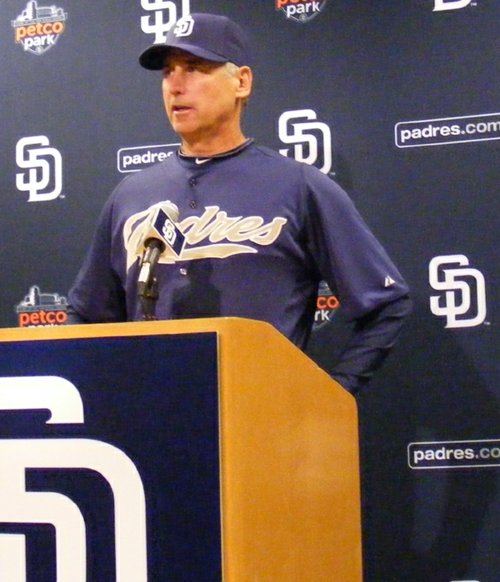 At a post-game press conference after the exhibition game between the San Diego Padres and the Kansas City Royals, Padres manager Bud Black announced the changes that were made directly after the game in order to set the 25-man and 40-man rosters. The position battle for the back-up infield spot between Everth Cabrera and Andy Parrino went to Parrino.

In the outfield, with James Darnell already having been sent down, Jeremy Hermida won a spot backing up either corner outfield position with Mark Kotsay going onto the 15-day disabled list with a calf strain. And the last relief pitching opening was filled by Micah Owings over Brad Brach.

Cabrera and Brach were optioned to AAA Tucson.

General Manager Josh Byrnes addressed specific reasons behind the decisions made. "When a left-handed hitting outfielder goes down, [Hermida] certainly stood a chance. He can play a couple of spots in the outfield. We claimed him for a reason last fall and we signed him for a reason, and he earned a spot," said Byrnes about Hermida making the roster.

"Very hard decision, two switch hitters that can play all over, it's a very hard decision," Byrnes said about choosing between Andy Parino and Everth Cabrera. "Parrino probably swung the bat a little bit better. That's a spot we play a lot and they both deserve a lot of credit."

Andy Parrino got his first taste of the big leagues after being called up last season and saw limited action batting .182 in only 44 at-bats. This spring, while Parrino hit only .212 and Cabrera .210, Parrino showed power belting 5 home runs in Cactus League play.

While Byrnes didn't address the decision between keeping Micah Owings or Brad Brach, it's notable that Owings has the capacity to pitch long relief while that has never been Brach's role before. Micah Owings was brought into the Padres organization in the off-season as a free agent competing for a job in the bullpen. Even had he not made the big club, Owings signed a contract that would have kept him in the Padres organization at the minor league level for all of 2012. Owings is also an outstanding hitter and offers manager Buddy Black an extra pinch hitter in a long game.

Jeremy Hermida was added to the 40-man roster without a painful subtraction. Minor league player Jose de Paula is still in his native Dominican Republic sorting through visa issues. The Padres have placed de Paula on the restricted list. Hermida has played with several clubs over his career. Last August, the Padres claimed Hermida off waivers from the Cincinnati Reds, and then released him to free agency in December. Seven days later the Padres resigned him.

The Padres 25-man roster is set:

Nick Hundley at catcher, Yonder Alonso at first base, Orlando Hudson at second base, Chase Headley at third base, Jason Bartlett at shortstop, Cameron Maybin in center field, Jesus Guzman in left field, and Will Venable in Right field will be the primary starters on the depth chart.

Reserves will be John Baker at catcher, Andy Parrino in the infield, with Chris Denorfia, Kyle Blanks, and Jeremy Hermida in the outfield. Blanks will also back up at first base if needed.

Despite the winning record this preseason, it looks to be a long, painful year. Good luck, Padres! You're going to need it!

It should be a better product on the field than in 2011. You never know. But they are a confident bunch, and Buddy Black seems to be pleased with what he's seen to this point. I guess we'll see how it translates. I can tell you that Black seems incredibly relaxed this season as compared to last season. Even with Kotsay and Quentin on the DL.