A strong showing heats up the competition in the contest to be the best Ethiopian restaurant in San Diego.

Stop three on my comprehensive survey of San Diego’s Ethiopian dining scene was Harar Ethiopian Restaurant (2432 El Cajon Boulevard, 619-295-3735). It wasn’t too hard to find, since it’s just down the street from Awash Market. On the outside, Harar looks no great shakes. The ugly, green facade makes it appear more like a plumbing supply store than a restaurant. 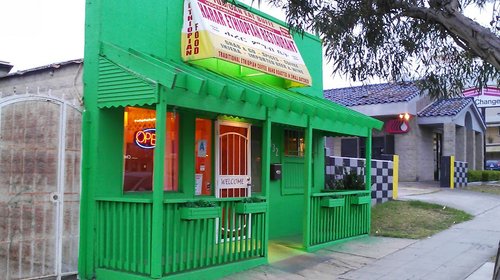 Yet the modest interior opens onto a pretty rad patio, complete with rattan chairs and chilled-out lighting. I’d never have guessed by looking at the squat building from the front. 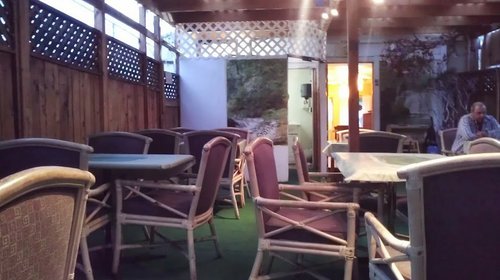 Harar resembles Awash in the urgency of service (or lack thereof). Though I was the only table for a while, my food didn’t rocket from the kitchen. But, as with Awash, waiting didn’t hurt anything and the meal was worth it.

Entrees were cheap ($7-10) and large, with enough injera to go around. The bread wasn’t quite as good as the super-fresh, tangy stuff at Awash, but it was still very good. The vegetarian sample platter filed an entire tray with vegetable wot and other stewed dishes. Of particular note was a sweet, lightly spiced concoction of beets and onions that served as a kind of vegetarian gored gored (which is usually made with chunks of tender beef).

Taking the risk, I ordered kitfo. The Ethiopian version of steak tartare is often served cooked and spiced with berbere or mitmita powder, but cool places serve it raw if you want. 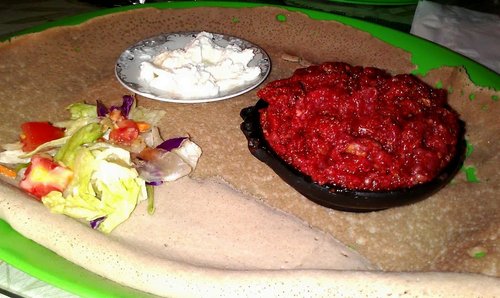 And I guess that makes Harar pretty cool! They did a good job with the kitfo, getting it just spicy enough that the cool, salty cheese served on the side was a welcome addition, but the rich flavor of the niter kibbeh (a seasoned, clarified butter) wasn’t obscured.

I’m fully aware (and so should you all be) that consuming raw beef can have...unpleasant consequences. This is true whether you get it at an Ethiopian family restaurant or a white-linens and fine wines French fine dining spot. Chances are they both got their meat from more or less the same place, since something like four companies control 80+% of the commercial meat trade in the US. Be that as it may, I strongly suggest everybody tough it up a little and dig into a bowl of kitfo sometime. It’s very much worth it!

Thus far, Harar has a strong lead in the competition for best overall Ethiopian restaurant. Awash would be choice number two. Red Sea is the lanterne rouge.