I’d known of Su-Mei Yu, the talented chef and owner of popular Thai eatery Saffron (3731 India Street, Mission Hills) for years, but the first time I actually met her was at a pop-up culinary education event in a seafood warehouse. She was leading a cooking class as part of Catalina Offshore Products’ popular “Collaboration Kitchen” series, and doing a hell of a job of it. At first glance, she looks small, even diminutive, but you get her talking—about anything, not just food…but especially food—and she is a spitfire; a juggernaut of personality with knowledge and humor to spare. I sat there, riveted, writing down notes on every step she took the class through, almost wishing it would never end.

I know this sounds like syrup-dripping hyperbole, but the fact that it does should say something. I think we can all agree that I tend to be pretty tough to impress; curmudgeonly at times even. So, the fact that someone could wow me so much, so instantaneously, says a lot about her ability to engage an audience. The reason I’m dusting off this happy memory is because, tonight, you will have the opportunity to be introduced to Yu in a similar fashion when her new show Savor San Diego with Su-Mei Yu debuts on KPBS at 9:30 p.m. 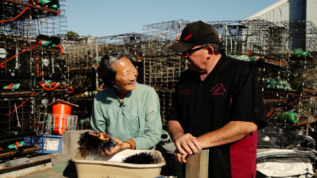 As the apron-clad hostess with the mostest, Yu will take viewers around to some of her favorite producers and purveyors throughout San Diego County. The first episode finds her exploring polar opposite proteins—tofu from El Cajon’s San Diego Soy Dairy and grass-fed beef from Palomar Mountain’s Mendenhall Valley Ranch. Not only will Yu provide behind-the-scenes shots of the inner workings of businesses like these, she’ll also explain how to utilize their products to put together healthful dishes easily executed in a home kitchen environment.

In future episodes, she’ll continue to explore local farms, pastures, waters, and other centers for artisanal production. She’s the perfect individual to do so. And not just because she’s been a San Diego edible scene fixture for over a quarter-century. Yu’s got the goods and the authentic passion for food and San Diego. I’m excited to watch her debut and encourage others to do so as well. Not a night owl and have yet to join the ranks of the DVR-equipped? Not to worry. Savor San Diego’s inaugural episode will reair this Saturday at 3:30 p.m.