I met Navy linguist-turned-pro baker Misty Birchall at a San Diego Brewers Guild meeting in 2010. Despite being a local craft beer journalist, it seemed more people at the meeting were familiar with her than me. Of course, I didn’t have delicious beer-infused cupcakes to my credit. Apparently, nothing can cement one’s image in peoples' minds like sugary, IPA-spiked buttercream!

Since our first meeting, Birchall’s business, PubCakes, has risen quickly, gaining notoriety among the county’s craft beer sect, opening a shared storefront with Treehouse Coffee Co. (7229 El Cajon Boulevard, College East), appearing at events around town, in craft beer-centric books and periodicals, and even scoring time on the Food Network competitive cooking show Cupcake Wars. It was fun to watch such a positive evolution based on sheer determination and extremely flavorful desserts.

PubCakes seemed unstoppable, but apparently, frosting isn't bulletproof. Birchall is vacating the beer garden-equipped storefront (quite the value-added for a dessert dealership), a development that will be recognized in tandem with PubCakes’ second anniversary during an event from 11 a.m. to 4 p.m., Saturday, February 2. Details about the event are provided in the accompanying graphic. 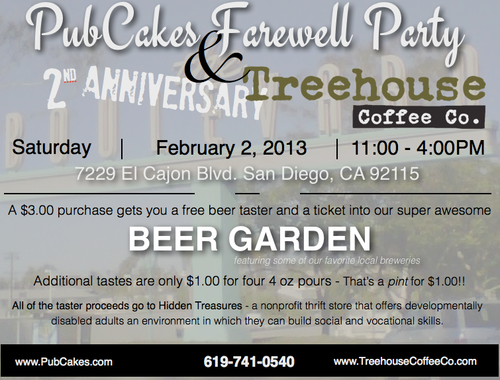 Seems odd for one to celebrate an anniversary the same day they close their sole retail outlet, but this is not the end of PubCakes. Birchall is currently kicking around ideas to restructure the business. Currently, that includes adopting a catering and events-only model or going into the beer cake mix business.

This year, in lieu of a birthday cake, my wife surprised me with a dozen PubCakes which my revelers and I promptly devoured (with beer, of course), so both plans have merit. Birchall’s personal favorite is the mix idea. Her plan is to take her base recipes and package them with pre-made frostings and fillings so that customers can make them at home. They will be available on the Pubcakes website as well as at various farmers markets.

“If you aren’t succeeding doing one thing, you have to change or it will go away,” says Birchall. “I know people are going to be disappointed, but I’m just happy that PubCakes will still be around. You’ll find me at beer festivals, and it looks like Treehouse Coffee and I are working out a partnership so that at least a couple of the flavors will still be available.”