La Mesa Ukrainian restaurant boils and stews it all

Having recently read Dead Souls, I’ve had the culture and cuisine of Eastern Europe at least somewhat on my mind. When word of Kalina reached my ears, I knew I had to get out to La Mesa to visit the Ukrainian restaurant. It turns out that it’s the work of former staff from Pomegranate, the Georgian restaurant in North Park that has (confusingly) become one with Petrushka. 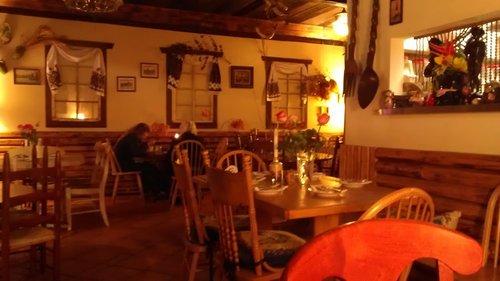 The self-styled “Village House” is an accurate subtitle for Kalina, as the the decor could only be described as cottagey. Artifacts of the rustic life adorned the walls and the server was dressed in a folk costume, which put an amusing spin on her general ineptitude. For whatever reason, I can tolerate clumsy service if the responsible party is cheerful and gives the appearance of sincerely trying.

I would guess that 80% of the menu is either stewed, boiled, or braised in some way. My meal included pelmeni ($6.99), Siberian-style boiled dumplings stuffed with minced meat. Their tender dough belied a skilled hand behind the rolling pin and the simple combination of butter, cracked pepper, and sour cream accompanied them nicely. 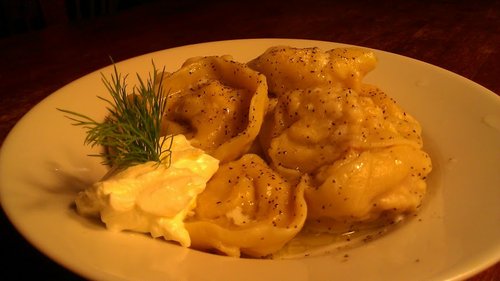 Borscht ($6.99), the iconic Russian soup, lived up to its reputation as complete meal. Chunks of beef and cabbage mingled with cubes of stewed beet. While undeniably earthy to the taste, the savory soup had more delicacy than I expected from a bowl of beets, which are prone to utter domination. Liberal use of herbs is probably the cause of that.

Chakapuli, a dish of braised lamb in plum sauce, was something of a disappointment at almost $20. The solitary scoop of cold, gluey mashed potatoes was a poor player and the meat had no real distinction. True, the portion was enormous (as were all the servings at Kalina) and it was hearty and nutritious fare, but there was little to be excited over. 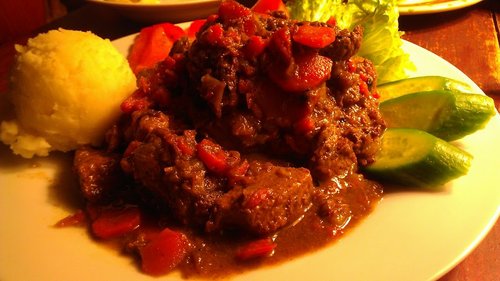 Holubsti ($13.50), a stuffed cabbage dish, was an improvement. They had been braised in oil and served with a thick tomato sauce, which made them much more substantial than the Polish style of cabbage with which I’m more familiar. 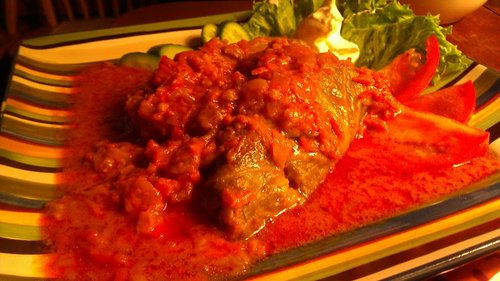 Many items had been stricken from the menu by judicious use of a Sharpie marker and I wonder if Kalina is in the process of revision or simply scaling back the kitchen’s efforts out of thrift. TIme will tell, but I intend to follow up.