I believe in multi-tasking and love killing two birds with one stone. The evening I ventured to Pizza Port Solana Beach to interview brewer Devon Randall about taking over the brewpub’s system, I followed up that session with a short walk to the Cedros Design District to check out the site of a brewery that, at the time, was still under construction.

The name of that operation is Culture Brewing Co. (111 South Cedros Avenue, Solana Beach), and I had been in touch with the trio of brewers and entrepreneurs behind it via email for several weeks. I didn’t expect to find them there, but as I positioned myself to take a photo of the building’s exterior, out came the point-man from our communications, John Niedernhofer. We shook hands and, next thing I knew, I was sampling the work-in-progress brewery’s imperial stout straight from one of their five 10-barrel fermenters. Duo of birds effectively slaughtered.

I sampled the beer—which wasn’t quite done fermenting, but promisingly rich and chocolaty—with Niedernhofer and his long-time associates, Steve Ragan and Dennis Williams. Ragan is the lead brewer. Formerly an architectural designer, he is very much a student of brewing and focused on drilling down to the finest details about the craft and developing exact measurements to achieve consistency with his beers. Williams has been brewing for five years and adds adventure to the equation via a personal thirst for creation and experimentation. While Niedernhofer is very much entrenched in the company and first brewed 20 years ago, he is focusing more on the business and, considering the work he was doing when I arrived at Culture, the carpentry aspects of this venture. 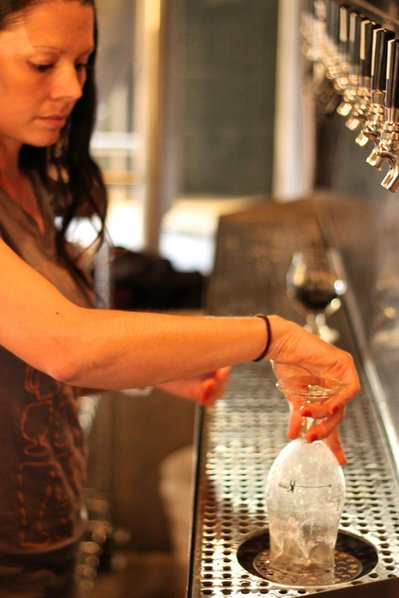 Culture is the result of this threesome’s shared and continuously increasing interest in homebrewing. According to Niedernhofer, over their many years of homebrewing, things kept expanding in terms of the amount and size of equipment, ingredients, people involved, and time committed. It came to the point where they considered organizing a formal home brewing club, then realized the financial and time considerations were nearly as complicated as building a business. So, they shifted course and did the latter instead. 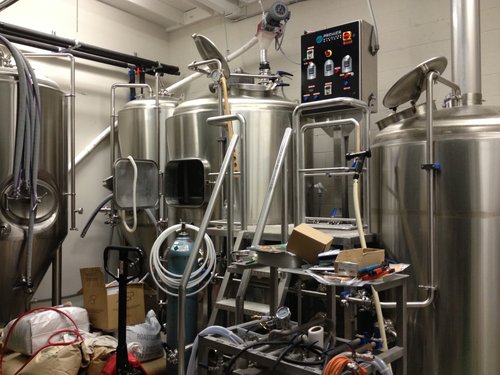 Since my visit, Culture has entered its soft open period, rolling out a total of six beers that fall in line with their desire to primarily produce spot-on incarnations of classic styles. In addition to the imperial stout, the tasting room offerings have included a big-bodied pale ale, amber ale, blonde ale, brown ale, and West Coast-style IPA. A black IPA is fermenting away and should debut within a week. The trio are brewing on a 10-barrel system sourced from Escondido company Premier Stainless Systems.

Right now, the only place to taste Culture’s beers is in their tasting room. Described as a “warm industrial” space, it is designed to serve as an extension of the brewhouse and expose people to the ingredients, equipment, and process of brewing. Eventually, they plan on packaging their beers and are interested in canning, but kegs will come first and be distributed to local accounts.

Culture’s grand opening is scheduled to take place in March and their hours of operation are Wednesdays and Thursdays from 3 to 9 pm., Fridays 1 to 9 p.m., Saturdays 12 to 9 p.m. and Sundays 12 to 6 p.m.

Photos of glass and tasting room employee by Peter Katkov