Debuting a beer with personal local ties from Sierra Nevada

Yes, this is a feature all about local beers…usually. At face value, spotlighting a beer from Chico, California’s Sierra Nevada Brewing Company may look like an outright deviation from that formula, but there’s most definitely a local tie-in. Actually, the guy writing this is what makes this San Diego enough to share with all of you.

In addition to writing for the San Diego Reader, I am also the local columnist for a national publication called Celebrator Beer News. The longest running U.S. craft beer publication in operation, Celebrator just celebrated hitting the quarter century mark. To honor that achievement, Sierra Nevada invited the periodical’s staff to their facility to brew a special beer. Columnists from Alaska to the Midwest to our sudsy corner of the country converged in Chico and spent two days conceptualizing a recipe and helping to forge that idea into beery reality. The result is Sierra Nevada Celebrator Beer News 25th Anniversary Double Pale Ale. 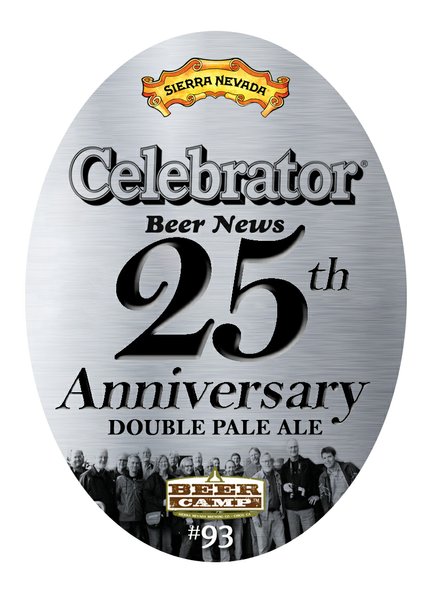 Never thought I'd see myself on a tap handle, but pretty proud to pose with this respectable bunch

After the sharing of many different concepts, the Celebrator staff decided it would be best to pay homage to a beer that was paving the way for brewers and turning the country’s palates on to craft 25 years ago—Sierra Nevada Pale Ale. But, while giving a respectful nod to the past, we wanted to modernize the recipe a bit, imperializing it and bolstering it with ingredients that weren’t available back in the day. The Double Pale Ale comes in at 9.2% alcohol-by-volume (far higher than the 5.6% ABV of the original) with the addition of Golden Promise, a Scottish variety of barley. Paler in color and less malty than the original, it bursts with fruity bitterness from Citra hops as well as Cascade harvested from Sierra Nevada’s estate hop vines.

The beer was a big hit at Celebrator’s 25th anniversary party during San Francisco Beer Week, and it is my hope that it will resonate just as well with palates here at home. All that’s left now is for you to taste it. Two locations have scored some—O’Brien’s Pub (4646 Convoy Street, Kearny Mesa) and Churchill’s Pub & Grille (887 West San Marcos Boulevard, San Marcos). The tapping date for the keg at Churchill's has yet to be determined, but the beer will for sure go on-tap at O’Brien’s at 5:30 p.m. on Tuesday, February 26. A pair of celebrations just seems fitting for this brew.