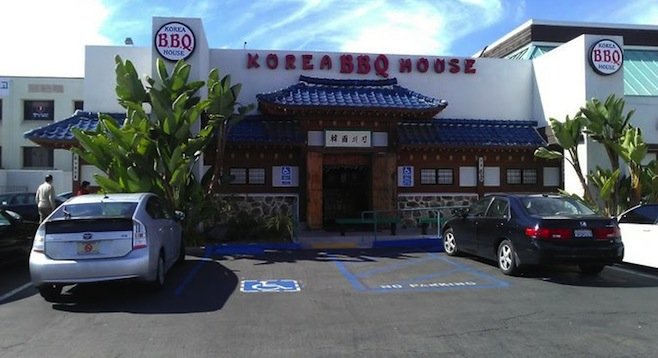 Seeing as how it’s next door to the legendary Min Sok Chon karaoke emporium, and how it’s been operating successfully for 30-odd years, I figured the Korea BBQ House (4620 Convoy Street) would be all right. The building’s blue, mock pagoda facade, parking lot, and bustling lunch crowd recommended it highly for an afternoon meal along Convoy Street.

The single-page lunch menu rattled off a dozen choices in the $8-$12 range, mostly the expected bbq beef and pork dishes that are mainstays at Korean lunch counters all over town. One dish, the han jeong sik, stood out because it came with all the banchan, or little side dishes that are a big part of Korean cooking.

For a measly $10, I got the full course: fried fish, a sizzling skillet of barbecued beef, steamed rice, and ten side dishes. The little plates of banchan included kim chee, brocolli with fermented chilli paste, seaweed salad, potato salad, and an odd dish of ham and potatoes. 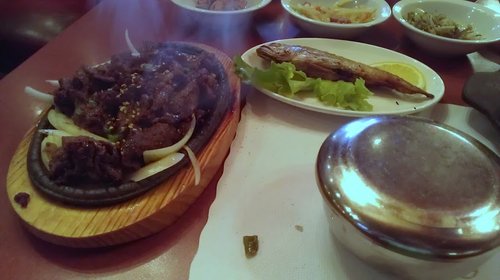 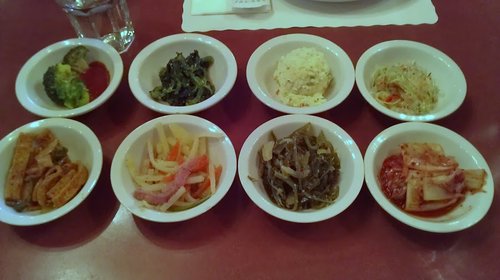 That’s a lot of food!

Sadly, there’s a downside. Nothing was exceptional. In one meal, I got to try thirteen different dishes, but nothing demanded my admiration. Ultimately, I felt that the kitchen phoned it in on the banchan and that the entire restaurant aimed low for the lunchtime crowd. I got the impression that I could have been in a food court somewhere instead of at a standalone restaurant in a notoriously scrumptious neighborhood.

The low price helps, but I wouldn’t travel more than five or ten minutes for another trip to Korea BBQ House.