New North Park brewery has all but one element for success

The last stop on my latest San Diego brewery tour was a recently opened spot called Thorn Street Brewery (3176 Thorn Street, North Park). Nestled in a mostly residential area away from the 30th Street fray, the venue resides in the building that once housed owner Dennis O’Connor’s homebrewing supply store, Home Brews and Gardens. Early last year, O’Connor started the process of converting the store to a combination brewery, complete with a seven-barrel brewhouse, and two-part tasting space. It took some time, but now that it’s open, Thorn Street is enjoying a steady flow of business. A number of colleagues and friends of mine, many of which reside in or near North Park, made it there before me and though reports were mixed, the hometowners had mostly positive things to say. 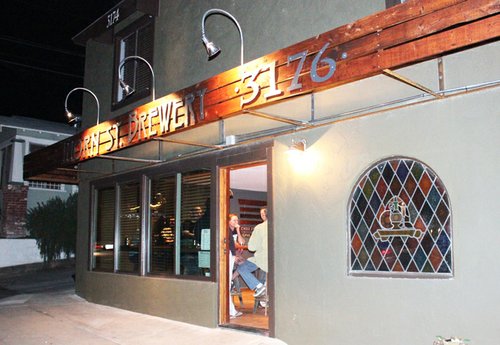 Encouraged, I entered into the bustling front bar area; a homey space done up in earth tones with lacquered woods and a simple yet stylish stained glass window. Plenty of people were bellied up to the bar and, like me, ordering a sampler flight consisting of all of the nine beers they had on tap. That assortment consisted mostly of traditional European styles augmented by a couple of new age creations including a chili pale ale, agave amber ale, and American strong ale. 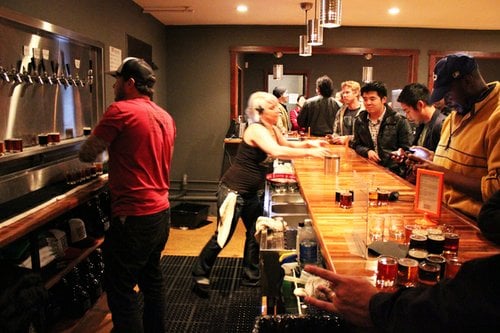 When presenting the flights, the bar staff, a swift and responsive bunch, ran down which beers were which. This proved essential as many of them looked exactly the same or so similar as to be indiscernible from one another. This was especially true of the first five—a Kolsch, English pale ale, pale ale, chili pale ale, and agave amber ale. Three of them are pales, so some color and head similarities are expected. What I didn’t expect was that all of them, with the exception of the pepper-infused beer (which was my favorite), tasted almost exactly the same as well. The Kolsch had the same mouthfeel and flavors as the pales. Both were more viscous and less effervescent than outlined by style guidelines. Light burnt sugar nuances helped set the agave amber apart a bit. 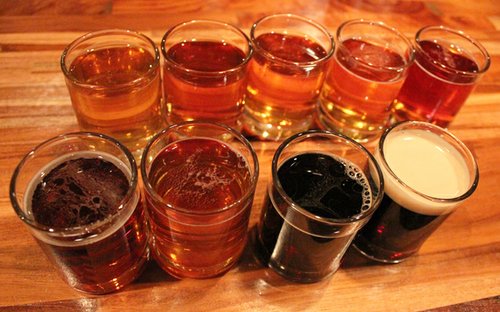 The remaining beers—an IPA, stout, coffee stout, and the strong ale—offered more diversity, but were universally dull, flavor-wise. The strong ale tasted a bit boozy and sweet, the IPA had nice tropical notes but was too low in hop bitterness to compete on a local level, and the stout was roasty but a bit thin while the coffee-infused version of that variety packed more flavor, but tasted more like chocolate milk than java. 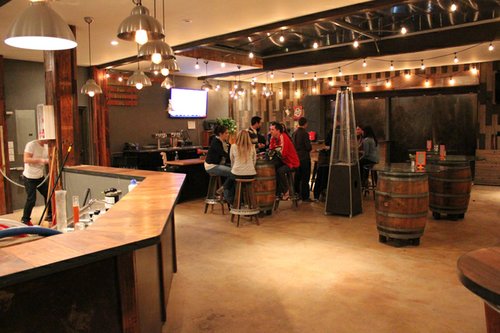 Overall the beer isn’t bad. It’s just…unremarkable. Even so, our group had a good time hanging out in Thorn Street’s back room, a spacious area that houses the brewing equipment as well as its own separate bar, plus plenty of seating, tables, and upturned barrels. Toys and board games give the young-at-heart something to do while they catch up with friends or unwind from a hard day. It’s one of the nicest tasting spaces of any comparably sized brewing company in the county. Kudos on the heaters, a nice plus!

Thorn Street reminds me of the earlier days of Karl Strauss Brewing Company when most of the beers were the same color and, for the most part, tasted the same. Still, there were hardly any other craft breweries in town and Uncle Karl’s brewery restaurants were lovely places to down those immensely similar, mostly Germanic brews. That company has since upgraded and better differentiated their individual beers and their reputation and street cred’ have risen as a result.

San Diego craft beer fans flock to new locations early, eager to check them out and find out if they have what it takes to merit return visits. With most new breweries located out-of-the-way in business parks or communities a fur piece from central San Diego, those businesses have a lot to lose during these early periods. It takes a lot to inspire customers to view a far-off rookie business as a destination worth the drive.

To a large extent, much of that doesn’t apply to Thorn Street. Being located in North Park, an (if not the) “it” neighborhood helps a lot, as does the fact that so many people both live and play there. It’s easy to envision this business thriving strictly because of North Parkers’ tendency to embrace all things North Park. Supporting your local everything is definitely a good thing and O’Connor has made it clear that his primary mission from the get-go is to provide North Park a neighborhood brewery, but if Thorn Street is to appeal to outsiders as well, drinkers with a wealth of high quality craft beer options throughout the county, they’ll likely need to up their game and more clearly define their flavors. Early patronage should provide them the time with which to do so and, hopefully, they will. Thorn Street is a warm, fun social hub with a lot to offer. Add exceptional beer and there’s little more a craft beer fan could desire.

Does any one else think its a little weird to have a guy who works for Stone Brewing reviewing other San Diego breweries? Conflict of interest maybe? I completely disagree with the reviews of the beer, although I'll have to recheck the acceptable viscosity levels in the style guidelines. Does Stone really adhere to "the style guidelines"? The beer might not be exceptional yet, but its a little unfair to expect that from a place that just opened up.

I agree.I think that the Beer Touring article written by the Stone Brewing Company's communications specialist might be slightly biased. I love the Thorn St. IPA. It gives Stone IPA and Ballast points Sculpin IPA some serious competition.