I liked Kip’s, mostly because it had some history and they served up tasty frog legs, but with the oversaturation of restaurants in and around that block of Hillcrest it barely registered when Kip’s closed and Noodle Etc temporarily took up residence in the spot. Now, Noodle Etc is gone from 3925 Fourth Avenue and a totally different crew is at the helm of the restaurant. They’ve named it Snooty Asian, which is bold but kind of funny, and it’s been soft open for a week or so.

The idea behind the new restaurant is to cherry pick the best and brightest dishes from various Asian cooking traditions and create a wild menu of mingling flavors. It’s an ambitious project, but worthy.

As of now, the menu is rough and the staff is still figuring it out. I only got a taste of what the restau will be like, but the pan-Asian stylings are right there already. The chicken wings could have been dressed up “Thai style” or “Viet style.” The Vietnamese method had them doused in a sweet, salty, sticky glaze that tasted of fish sauce. Very good.

A plate of fritters came with four nuggets of shrimp, corn, and scallions battered together, fried, and served with another sweet glaze. While not as exciting as the wings, there was nothing really lacking in the fritters, which are almost delicious by definition.

Now, when they say “Asian” at the Snooty Asian, they don’t just mean the mainstay cuisines that are already popular in the US. I worked my way through a plate of “Rendang,” which is an Indonesian dish of braised, spicy beef served with garlicky rice crackers and steamed white rice. A totally cool dish.

Similarly, a Malaysian sour soup with thick noodles, shrimp, chicken and coconut milk held my interest for a long while. It wasn’t quite pho and not quite tom kha, but it had some of the attractive features of both. 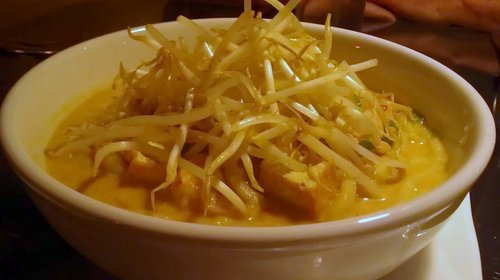 Oddly, the standout was a Hainanese chicken and rice dish that consisted of lukewarm, boiled chicken and chicken-flavored rice. Very cool to see, and straight out of Chinese classical cooking. The chef sure knows how to boil a chicken. 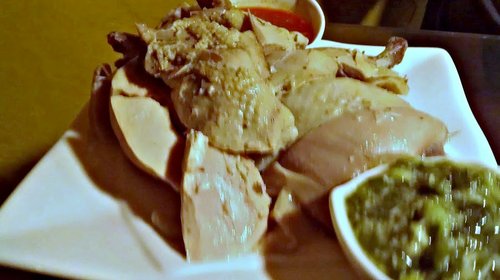 I don’t know if prices are worked out yet, because they weren’t listed on the menu. In the end, three main dishes and two starters cost about $65, which isn’t all that bad. The service on the food was ideal for family style eating and I can foresee some epic meals being shared at the Snooty Asian. I gleaned that there are some cool things on the horizon for the restaurant, like instruction cards to show diners how to eat with their hands, a de rigueur practice in much of Asia.

I didn’t even get a chance to delve into the full sushi menu!

However Snooty Asian starts to take shape approaching the grand opening (slated for May 11th), I detected a lot of potential in this restaurant and I would love to see a little excitement building in the runup to its official opening.