A free look at a pricey, but delicious dining experience at George's California Modern

It’s always good to be in with the chef, but sometimes it really pays off. Case in point for me—on a recent trip to George’s California Modern (1250 Prospect Street, La Jolla), executive chef Trey Foshee was in the process of serving one of his special TBL3 menus to a table of epicureans and graciously allowed me to partake. For those who’ve never heard of it, TBL3 is a special dining experience, a 12- to 14-course menu made up of some of Foshee’s more elaborate and experimental dishes. Guests can call ahead to take part. The price tag is hefty, but the cavalcade of imaginative, expertly prepared, and downright artful plates that emerge from the kitchen will justify the cost for those afflicted with the foodie virus.

While I didn’t get to try all of the dishes on the night’s bill of fare (Foshee constructs a new menu for each TBL3 foray), he allowed me to sample nine of them from the other side of the dining room. It was like being a well fed passenger on some gastronomic underground railroad. I felt fortunate to get a taste and vowed not to squander the opportunity to let readers in on what TBL3 looks and tastes like. Anybody laying down big money for something like this should go in as informed as possible. So, without further adieu, allow me to submit my TBL3 experience for your approval.

The first offering to grace the table was easily the prettiest. Sweet chunks of lobster topped with fiery orange steelhead salmon roe shared nicely arranged space with Jerusalem artichokes (a.k.a., sunchokes) and brightly tart lemon cream. The latter was in perfect sync with the slight acidity of the caviar, which had been cured with sake. The poignant luxury ingredients were lightened up nicely with the accoutrements, including French sorrel, which earned style points for taste and looks. 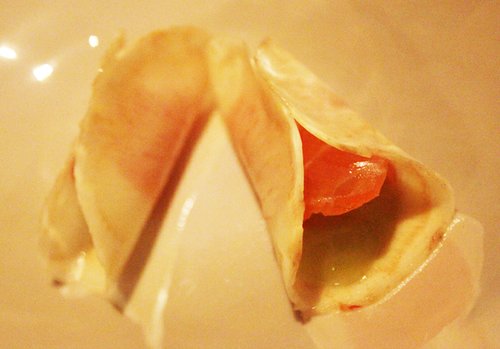 Next up was something both playful and tasty—“fish tacos.” Given Foshee’s love of the ocean and its inhabitants, it wasn’t surprising to see him go with San Diego’s beach cuisine staple. What did take me aback was his take on it. The chef utilized thinly-sliced celeriac as the tortilla component to hold salmon marinated in a Buddah’s hand citrus vinegar mixture. And in the place of salsa—smoked apple gelée. It may have looked like a taco, but that’s where the comparison ended. The apple was the predominant flavor. It worked well with the celery root, making for a refreshing amuse. 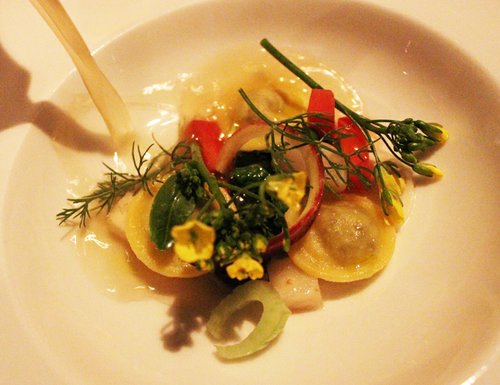 Course three came to the table in the form of a bowl containing a trio of black truffle raviolini and a planter’s box-worth of petitely pared veg and flowery herbs. It was the kind of dish I almost hate to ruin with flatware. Fortunately, my waiter laid it to waste by pouring in a warm, crystal clear, amber broth over it to complete Foshee’s reimagined version of minestrone soup. Wisps of steam carried the strong scent of fennel. The flavor of the soup carried more delicate anise notes, but the stars of the show were those raviolini. Their soft, homogenous filling positively burst with truffle flavor. I hate to reduce something so exceptional to an acronym, but OMG! 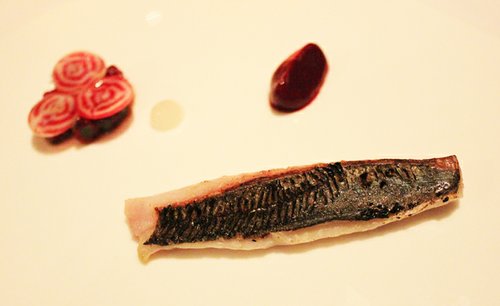 Foshee went back to sea fare for the next dish, serving up a minimalist plate consisting of a thin strip of aji (Japanese mackerel) with salted red beets served up two ways along with cute red-and-white Chioggia beets, and a dab of lime gelée. The mackerel had been charred, most likely using a kitchen torch. It was a nice, doting preparation, and the lime offered good contrast, but after all that preceded it, the dish felt a bit pedestrian. That’s the trouble with wowing a palate…doing so makes it tougher and tougher with each dish that follows to replicate that extreme awe factor.

This is starting to get long, so I’ll pick up where I left off tomorrow. If you can believe it, I haven’t even got to my favorite two dishes of the evening. You’ll definitely want to check back tomorrow for those!