Is it OK to eat at cultish places?

You gotta read Barbarella’s piece on eating at The Yellow Deli.

I’ve been there (315 East Broadway, Vista, 760-631-1888) a couple of times, liked it and them a lot. I mean cheery, businesslike, open people. I knew they were Twelve Tribes, a nicely hippy-rooted group who somehow want to get back to the early Judeo-Christian thing. 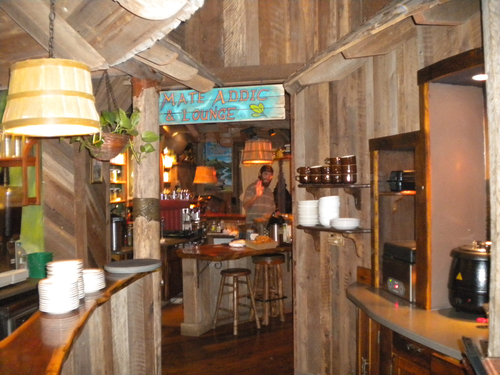 Inside the woody, hand-carved Yellow Deli

But I never realized some of the things Ms. B quotes that make the Twelve Tribes people tick. And make me twitch. Read her piece.

No two ways about it, it’s a beautiful place. But you do get the feeling when you go there that it’s somehow too beautiful. Or is it that we unhappy sinners just can’t handle people who are happy to Obey Rules for the greater good of the group?

Then I think: these people in Vista didn't invent all that venemous BS. They're just trying to live good lives. Why punish them for their leaders' desperation for the "good" old days? Maybe we should just go and talk them out of their prejudices.

Whatever, soon as I read Ms. B’s column, I couldn’t help thinking of another great, healthy, cheap eatery that comes at a price. Loving Hut, the vegan restaurant on El Cajon Boulevard (at 1905 El Cajon Boulevard, 619-683-9490).

Only thing is – and they’re quite open about this – they’re part of a worldwide network of restaurants controlled by someone who calls herself "Supreme Master" Ching Hai.

So when you go eat, there she is, a constant presence on – what else? - Supreme Master TV, showing the Supreme Master herself speaking Words of Wisdom to her adoring masses on how to live. As I jes’ had to say in a response to Barbarella’s piece, how long before she (Supreme Master, not Barb) starts telling us all how to vote?

I'm sure the people running both joints are reaching out to us with love, but you can't help believing their Masters have figured (rightly) that the best way to get to people is through their stomachs.

I dunno: democratic instincts make you shrink away from any “masters” who call themselves “Supreme.”

I dig restaurants that affiliate themselves with any kind of fringe religious system. Back in the day, I worked at this farmer' market and there was a Twelve Tribes booth (maybe even the same tribes) that sold breads, jamaica, and mate. My friend Galab and I would always drink the "cult juice" and eat the "cult bread." We would joke that we could "feel it taking effect" and making believers of us, jaja.

I guess my sense of hipster irony got the better of me.

The most interesting thing about communal groups is that they seem a little...dated. I imagine the scene from Easy Rider where they drop the hippie guy off at this commune and it's just like, "well, here's another group of people trying out some form of quasi-religious group home." I get the impression that there was a 60's and 70's heyday for such groups, but that the halcyon days of joining cultish spiritual groups are long gone.

Maybe it's incorrect of me, but I feel as though it was less weird for people to change their names, grow long hair, and forgo shoes forty or fifty years ago as compared to now.

Nothing outdated about freedom of speech, Ian. And for that very reason, any group--religious, secular or communal--spouting their beliefs are entitled to do so. Which brings me to my point, Ed, that those serving folks at the Yellow Delis or Mate stands at local farmer's markets are not spouting their beliefs at the customers, are they? They are offering a community service which patrons are voluntarily opting to purchase and thereby support. If we as consumers don't like their beliefs, then it is our free chose to not frequent their establishments, is it not?

It should be noted that they DO pay taxes but choose to NOT vote (an arrangement many are grateful for). This can't be said of other cult leaders and corporate CEO's with similar beliefs who actually finance political careers and are majority shareholders in major US media empires. May as well boycott all sushi restaurants as most are owned by messiah Sun Myung Moon's Unification Church. May as well never step foot into a Walmart again. We live in a country where mob hysteria can condemn companies like Chick-Fil-A as an "Anti-Gay" corporation based on it's owners religious beliefs (versus verifiable corporate exclusionary policies/practices), so you'd be in good company. While we're at it, I suppose we should all lose our Prius's because it's unpatriotic to buy foreign made products.

Where does it end? This country was founded on the right to say and practice what we believe. It IS still the land of opportunity. We are all free to choose where to drop our hard earned dime.

Funny that you brought up the mate, because it is KEY to their whole operation. 'Nough said.

It's not their beliefs that make them a cult, by the way, or that they willingly follow a guy calling himself a messiah--cause, well, heck, they wouldn't be the first. They are a cult --technically--because they shun (and more) members who do or say anything counter to the 'doctrine'.

Also, there have been communal --religious and secular--groups f-o-r-e-v-e-r. Would you say Satmars, for instance, are "out dated"?

I more meant that it seems unfashionable to be in a religious cult in 2012 than in, say, 1965 in the same respect that I think it seems a bit weird for people to still be, for instance, Mods.

Back when the Hare Krishnas ran a veggie food restaurant called Govindas near the North Park Theater, I used to eat there three or four times a week. They never once tried to get me to chant, nor did they chat me up about religion - they didn't even try to hand me their literature, tho quite a few books and pamphlets were on display (and given away free) in the entrance lobby. Heck, they even wore shoes, unlike the (many) times I've eaten at the PB Krishna temple itself (a breathtakingly beautiful place).

The food was so good that I still sometimes find myself dreaming about marvelous Krishna cuisine. I can't say that their food ever made me consider adopting their religious beliefs, so if their intent was some sort of outreach/recruitment, I must've been immune.

Unless of course what they were preaching was simply "eat healthy, eat well." In which case, mission accomplished! It was directly because of the amazing variety of delish dishes at Govindas that I decided to become a vegetarian. Until then, I never dreamed I could eat so well, and enjoy so much variety, with a meatless diet.

Hare Krishnas do make totally tasty snacks! I went to one of their temples for a project in college and one guy handed me some unidentfiable, totally delicious little candies. They included me in their ritutals a little bit too, even though I was just there to watch, but in kind of a nice way, like, "would you like to fan this flame over your face? By all means, feel free."

I think that was actually the morning I put 2 and 2 together about the lyrics to that George Harrison song, too.

Ever since I read Ed Bedford’s review of The Loving Hut filed it in the back of my mind to try it. Today, after stocking up at chocolate at Eclipse Chocolat (only the best chocolate ever!), I stopped at The Loving Hut and ordered my takeout.

While waiting, I was subjected to Supreme Master Ching Hai’s videos which, thankfully, were muted. But as I realized what I was viewing, I became angry and bewildered. There, on two video screens were scenes of animal cruelty, courtesy of PETA. Do I really need to see geese being force fed to enlarge their livers? Do I really need to see what an enlarged liver looks like? Attention, Supreme Master Ching Hai: If we are in your restaurant we have already converted - or flirted - with becoming vegetarian so why are you preaching to the choir? Bedford could have mentioned this in his review.

While my #43 Delight Broccoli was delish and reasonably priced, I will not be returning and subjecting myself to this “entertainment.” I have a perfectly lovely vegan restaurant in North Clairemont, Sipz, and will continue spending my hard-earned income there where there are no video screens and no goose screams.