I swear that Cabais Mexi-Deli is special, but you have to bear with me for a moment while I get through the nitty-gritty. It's a petite store located next to a tattoo shop in Hillcrest and it might be easy to pass by since the sign is painted on the wall and it sort of blends into that self-same tattoo parlor.

The unassuming facade gives way to a cozy, bright interior with an open kitchen that sparkles with the look of brand new, well-kept stainless steel. If nothing else were to distinguish it, Cabais wins an award for cleanliness. The otherwise cheerful, pastel space is interrupted by a weird, hologramatic picture of a vampire that oscillates between a Gothic nobleman and two distinctly spooky faces. Most of the time, it's caught in a horrifying triptych as the faces co-mingle into one grim visage. 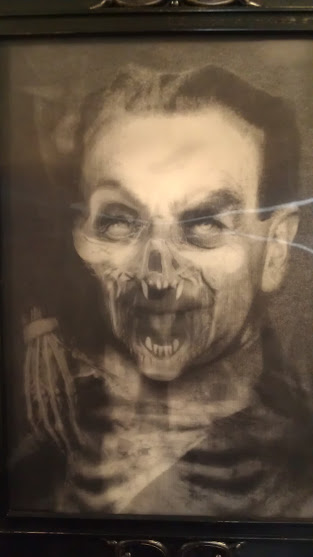 I've built enough suspense. Before I go any further I will let the knowledge slip. Cabais' aguas frescas are absolutely bomb. I tried a cantaloupe flavored one ($2 for a massive cup) because I'm unaccustomed to seeing one on the menu at my local taco places. It had chunks of melon floating in it and a genuine, fruity sweetness that makes me think they actually make it there. I know that there are plenty of great aguas frescas available at all kinds of places, but Cabais' was cheap and totally awesome. I am going back to try the strawberry one, stat...and then the jamaica. I am serious, people. Get on these fresh waters!

On the flip side, the food was merely adequate. I asked what was best (something I almost never do), and the girl recommended a grilled mahi-mahi burrito. There was plenty of fish, enough that I had a hard time finishing it, but the burro itself was too watery for my taste. The crunch of sliced cabbage was a good counterpoint to the creamy guacamole, but I couldn't figure out why it tasted so smoky until I consulted the menu and found that it contained chipotle sauce, which I suppose I could have guessed with a little more thoughtfulness. Perhaps I was too busy reveling in the melon agua fresca. 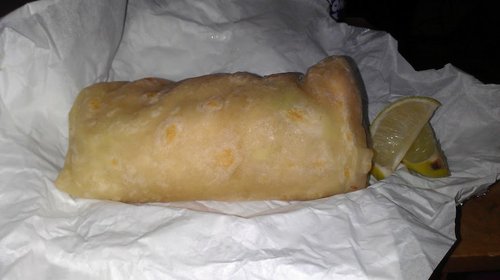 Better than the burrito was a dessert bar with cocount, chocolate chips, and almonds glued together with condensed milk on a graham-cracker crust. The thing was created with malice aforethought in terms of my pancreas, but I approve of the decadent wedge as an alternative to flan and rice pudding. 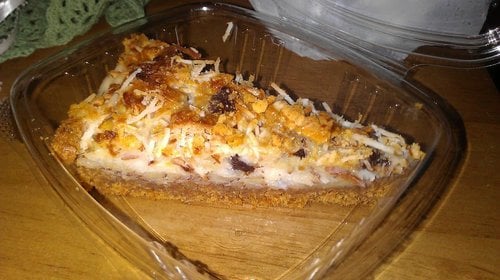 I like that Cabais has croissant sandwiches and, of all things, calamari on rye (which is weird enough that I must try it some time). This helps it live up to the "deli" designation and gives it another little toehold in the Sisyphean battle for taco shop dominance, a battle which can't be won yet is nevertheless worth fighting.

In the battle for aguas frescas, at least, Cabais stands out with the fortunate few.