Mariachis playing for guests, the courtyard filled with fountains and colorful umbrellas, a woman inside making flour tortillas from scratch, Mexican folk art, huge margaritas...I can go on and on. Casa Guadalajara in Old Town's Bazaar del Mundo has been pleasing its customers for many years. Owner Diane Powers knows what she is doing as she continues to expand her restaurant empire in San Diego. But Casa Guadalajara was one of her first, in 1995. 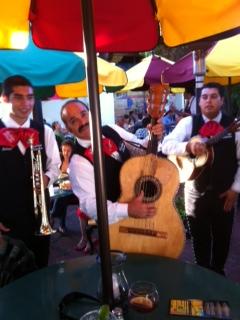 They had me at the chips. Having grown up in Texas, I am used to Tex-Mex food. Casa Guadalajara's chips are thick and not oily and their salsa is just right, not too spicy and not too mild. 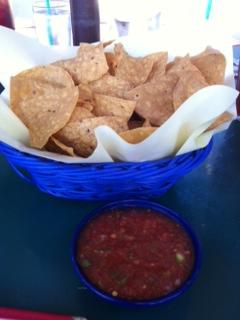 Casa Guadalajara offers quite a large menu (with daily specials). But it is a few of the appetizers that have caught my attention lately. First, the Crab Cakes Picante. Four mildly spicy crab cakes are served on crisp chipotle tostaditas atop field greens drizzled with jalapeño cream sauce. 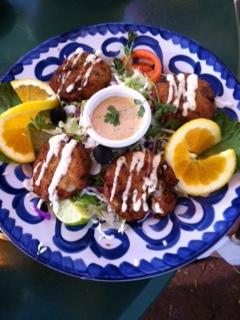 And the Ceviche a la Duran is a large portion, enough for a small eater at lunch and is a classic seafood dish of citrus marinated fish with chopped tomato, cilantro, onion, cucumber and avocado. 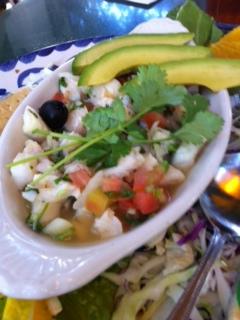 Remember that Ole! in the title? That's for Happy Hour Monday -- Friday from 4 p.m.--7 p.m. They serve a complimentary antojito buffet, refreshing margaritas, a variety of beers and cocktails at special happy hour prices.