Sometimes, a meal turns into a pleasant surprise even when the food isn't anything special

Seriously? That was the gist of my thoughts when I was outside Sanfilippo’s in Bankers Hill, about to walk in and join friends for dinner. Let’s just say my expectations were minimal and falling. ‘We’re, like, right down the street from the Tractor Room,' I wanted to say as my inner foodie hipster kid desired craft cocktails and game meat instead of noodles and red sauce.

But then I scoped out the menu and it turns out you can get a pitcher of Sanfilippo’s pale ale for under $10...whenever you want. Not just for happy hour. And it was good, too. Smooth. Drinkable, like an English-style ESB. I could’ve stopped and declared victory for Sanfilippo’s right there, but I didn’t. I gave the food a chance.

The front of the menu proclaimed the restaurant was the “home of the casserole.” And the house specialty commanded it’s own section, sans descriptions on what, exactly, the casserole contained. The “meatball, cheese, and bell pepper” casserole contained exactly that. The constituent elements laid in an oblate souffle dish with a smothering of red sauce and cheese. A few minutes in a hot oven gave everything a chance to melt together. The shape of the plate evoked images of some that my mother had when I was just a little dude eating mac and cheese from a box. The same dishes also showed up at the mom ‘n’ pop family restaurants we would go to in the years of little Ian. Seeing one in front of me the other day was a tad spooky, but also kind of cool.

The casserole itself was just a meatball covered in stuff, which is actually ok. It’s definitely the height of unpretentiousness. The meatball was of average deliciousness, making up for subtlety with excessive size. I ordered the small portion ($7.85) and it was more than adequate to my needs. It wasn’t much to look at, but there was plenty of it. 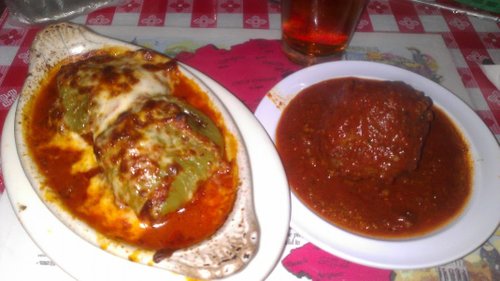 In fact, much of the food is under $10. It would’ve been an act of gluttony for me to try and eat the plates that featured, for example, lasagna AND meatballs AND sausage. The only things on the menu with bigger price tags were the dinner specials like chicken parmesan and linguine with clams. Some of them were almost $19 and I think it would be hard to justify the 50% price increase. A simple pasta plate is enough to feed two light eaters. 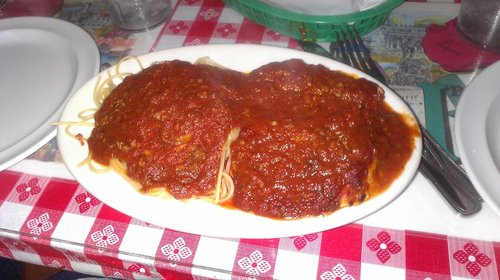 Sanfilippo’s also managed to boggle my mind with a touch of good service, too. I can only assume that their service must be lightning fast on any given day, because my waiter was apologetic over the “delays” we were experiencing. As an act of expiation, he rushed an extra order of free garlic bread to the table, apologizing the whole time.

I couldn’t have waited more than ten minutes for my food.

I’d like to see that kind of professional courtesy from most of the “nice” restaurants I go to.