I’m going to (mostly) ignore the fact that Celadon is a Thai-style restaurant specializing in the familiar rice and noodle dishes that characterize so many take-out joints in Hillcrest and elsewhere. The place had a lot more character than that. My friend had sworn there was “a place with a piano, like right over by the Tractor Room!” and eventually we figured out she meant Celadon. The 5th Ave location is the third for Celadon in 20 years, which is an impressive tenure in a high-rent district. Sure enough, there’s a piano inside. In fact, the interior is...well..it’s really nice. It’s a little odd, more classic Vegas or early-nineties LA than contemporary San Diego, but the mirrors, chandeliers, low lighting, and high ceilings come off as classy rather than wacky. The strange video playing on the bar TV, which depicted women dancing in muddy water with elephants, and other human-animal choreography, was a little creepy but also kind of cool.

Black-clad waiters flowed through the restaurant, greeting guests and attending tables with consummate professionalism. The quiet, effective, unobtrusive service would have been at home in a fine dining restaurant by virtue of its subtlety alone. Not once did I want for a server’s attention, yet they never made themselves ostentatious in the least. I could seriously recommend Celadon as a good date restaurant for the simple reason that there’s no risk of interruption or awkwardness from the staff. In a world where servers get touchy-feely on the regular and feel inclined to sit at my table uninvited, Celadon’s staff proved exceptional.

The restaurant has a supply of shochu (medium-proof distilled alcohol) and puts it to good use. The “Martinis” made up for being half-strength by being double-sized. A Thai tea cocktail was such a good idea--iced, creamy tea and a splash of liquor for $8--that I’ve half a mind to demand a version from a notable cocktail bar sometime if the opportunity strikes!

For the food, I tried some sausage ($6) as a starter, which was quite lovely served with a sweet glaze. Unless it’s over-cooked, sausage is pretty hard to ruin so there’s less to say about it than one might think. Still, I dig being spared from still more spring rolls. The idea of fried, curried fish paste also appealed to me for the sake of novelty. Perhaps next time. 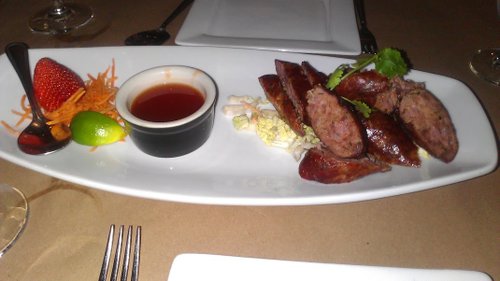 Entrees were above the norm in terms of price ($12-$16), but also in terms of size and quality. Shrimp pad thai didn’t suffer the gumminess and over-acidity that plagues mediocre noodle dishes and the shrimp hadn’t been overcooked, as is the case when short-order cooks are given access to delicate proteins. 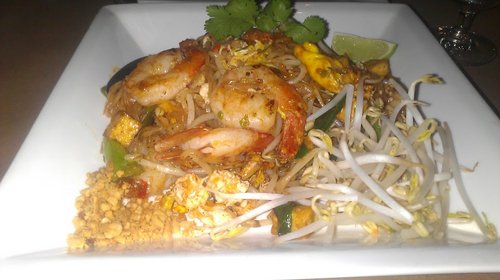 The virtue of boning out the roast duck is up for debate. While I appreciate being able to assault my meal without fear of choking on a bone, there’ some virtue (both in taste and presentation) to leaving the bones in the meat. I found the duck itself was a touch overcooked, but the pungent ginger sauce and the earthy taste of the accompanying spinach rounded the dish out well. 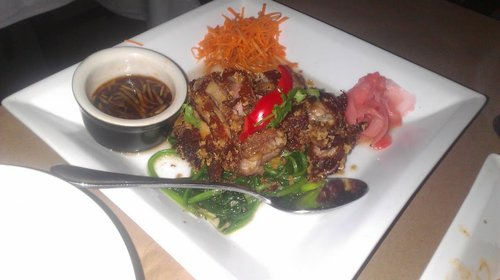 True, the premium for the food is a trifle high, but the surroundings are perhaps the best I’ve found for a Thai place. I can’t stress enough that Celadon’s service was good for any restaurant, not just among Thai spots. If diners stick with the “specialties,” most of which are more interesting than what’s typical of the average Thai restaurant, Celadon is a legit restaurant that exceeds expectations.