I’ve been feeling adventuresome lately, so I ordered a pork filled omelet despite the fact that I usually care for neither shredded pork nor omelets. I did it on the recommendation of Kawai, my server, at Island Style Café in Tierrasanta. Or rather, I asked what the most popular breakfast dishes are, and of the two she pointed out, the Puna omelet was the one least out-of-my-comfort-zone. 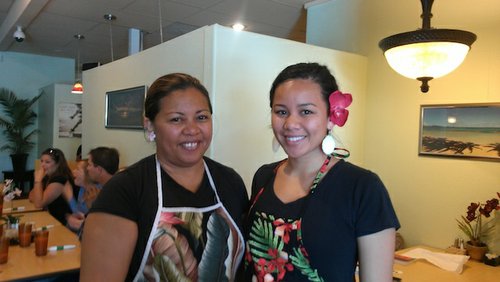 The dish I did not order, the Kaloko Moco ($8.95), included rice on a crepe with chopped spam and ham, hamburger patty, egg, sautéed onions and “brown gravy all over.” A far cry from the breakfast sandwiches of my most indulgent days and the egg whites and English muffins I fix for myself at home.

The Puna ($8.95) was a far cry from my usual breakfasts, too — just not quite as far. Shredded pork and cheese smothered in red sauce (pretty sure it’s Tabasco) and served with either potatoes, or fried or steamed rice. I went with the steamed rice. The menu said it was also served with “side fruits,” but that turned out to be just one half of a strawberry. The omelet, on the other hand, was the fattest I’ve ever seen. And quite possibly the tastiest — and most intimidating. 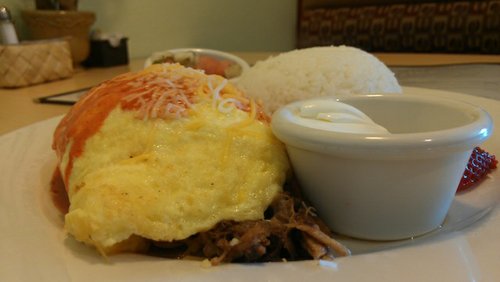 I think the reason I tend not to order omelets is that it’s just too much egg for me. This one was meat, meat, meat, and more meat wrapped in a bit of egg. The pork was super flavorful, but after about three bites, I got that sleepy feeling I used to experience after eating a pancake breakfast. I say a “bit of egg,” but the menu says these are three-egg omelets. All that meat dwarfed those three eggs.

I’m sure a person with a larger appetite than mine would appreciate the portions doled out here. As for me, I’ll probably order a fruit cup and toast on my next visit. The reggae music, the palm tree and hibiscus decorations, and the family vibe made it a comfy place to read and drink my coffee.