Bootlegger claims the “allure of a 1920’s speakeasy,” which is a rather dubious proposition unless you’re doing business without a liquor license. Something tells me that it would be easier to get an “illegal bar” vibe without big windows, bright TVs, and loud music playing. Don’t unlicensed entertainment venues make a point of keeping a low profile?

I quibble only half-heartedly, because I think the intentions came from a good place. Most of the bar is open space — the better for packing people in on weekend nights — but the booths and plushy chairs along the back wall are ripe for sitting. The house policy is 21+ at night, so the full menu of food and the comfy chairs are off limits to some.

Thinking the bar would mix an artful cocktail, I tried the “Real McCoy,” which tasted like a glass of cold, wet whiskey with vague hints of orange. It was rather amateur and I would have preferred a glass of good Bourbon without the adulteration. Similarly, the rest of the specialty cocktails looked to have been slapped together in a faux-crafty fashion. It would be better to stick with the reasonable list of bottled and draft beers, some of which are available in big buckets full of ice if you want to get the party started.

Much of the menu is sandwiches and appetizers, which implies drinking is priority number one at Bootlegger.

Not that that’s bad, per se, it’s just important to know.

The best foods seem to be the ones that go friendly with beer. Pretzels (2 for $7) were almost excellent despite the forgettable, white trashy jalapeno-cheese sauce served for dunking. Somebody in the organization is a fan of Alabama college football, and the riblets ($10) that bore the ‘Bama name were very scrumptious, albeit pitiful in size. The succulent meat feel easily from the bone and the plentiful barbecue sauce was good for enrobing the soft, salty fries. 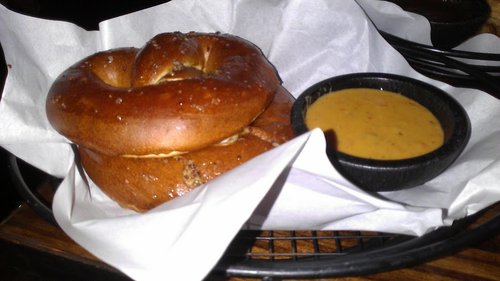 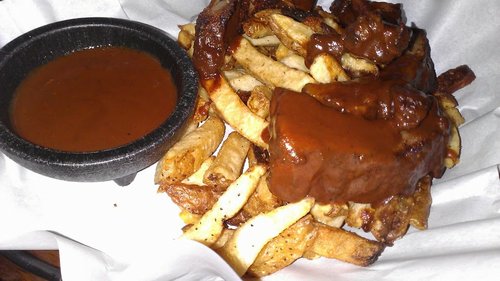 A chicken ceasar salad ($12) disappointed with careless prep, lackluster chicken, and imperceptible dressing. Similarly, a “TJ dog” could claim only advantageous pricing ($4) as the spirit of the hotdog was all wrong--too much dog and not enough bacon, peppers, onions, and wonderful, wonderful toppings.

I went to Bootlegger expecting more of a high-concept, cocktails lounge with creative takes on classic comfort foods. My assumption is that it may have begun that way on paper, and that’s how it’s marketed, but reality has given us a club with mediocre food and beer in buckets.

Still, the chairs were very cozy.