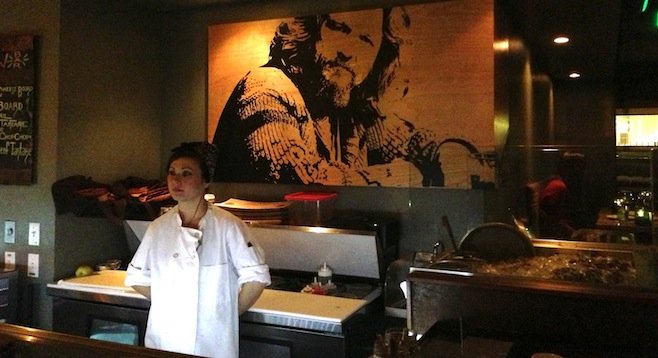 It was back in October, when I was in the area to be a guest on David Boylan's KPRI radio show, Lick the Plate, that I first became aware of chef and restauranteur Matt Gordon's North County restaurant and bar, Solace & the Moonlight Lounge. Once I saw the word "solace," I immediately thought of Urban Solace, which is closer to my home.

I was only there to share a drink with Boylan, but that glimpse of the menu had lingered in my mind, so I finally made a trip back up the coast to see how the fare differed from the fancy-comfort-food goodness of the Solace in North Park. We were joined by couple of friends, Shawn and Trisha, who'd recently relocated from Boston to Vista.

We sat upstairs, in a many-windowed room with high tables, bar, and oyster bar -- the upstairs area feels more casual and convivial, whereas the downstairs has an intimate, quiet dining feel. The first thing I noticed about the menu was more seafood. Despite it being a Monday (not the best day to expect fresh anything, let alone fish), David and Trisha ordered a sampler of the days oysters. Of the four kinds (Kumamotos, Hollie woods, Malpeques, Miyagis), they both preferred the Malpeques and Hollie woods. I wouldn't know any different, as my tasting notes on oysters have always included the words "salt" and "snot." It was a cold, misty night, and Trisha longed for some familiar comfort. She found it in a cup of clam chowder (with bacon, clams, potato, and house-made oyster crackers). I encouraged Shawn to order the cheddar and chive biscuits (because I wanted one). I could vouch for their scrumptiousness because these were also on Urban Solace's menu. David enjoyed their flakiness, attributing it to the possibility of the chef using lard instead of butter. EDIT UPDATE: Chef Matt Gordon clarifies, "No lard! All butter. The flakiness is in the mixing technique." We are duly impressed. The biscuits were served with orange honey butter and smoked tomato jam, which Shawn gleefully mixed together on each of his biscuit bites. Everyone had a taste of the fried green tomatoes with whipped feta crème fraîche and a "spicy herb purée. The flavor and texture combo was nice, but I would have preferred the temperature of each of the components to be more harmonious -- the cold of the whipped white stuff to the hot of the fried tomato beneath distracted somewhat from the flavors. I was working in low light after the sun went down, so the photos of our entrees do not do these dishes justice. I ordered the scallops (our server Heather's favorite dish). They were seared diver scallops with a hazelnut crust, butternut squash puree, and garlic kale. I've never been much for kale (I'm a spinach and broccoli gal), but this preparation had me converted. The chicken, too, came with a side of kale. Both David and Trisha ordered the sweet (enhanced with a pinch of salt) maple roasted Jidori chicken, served with roasted caramelized sweet potato and a similar version of kale, but with bacon. Both the chicken and scallops were tender and not overcooked (such an easy thing to do), and everything was delicious. I didn't taste Shawn's steak (grass-fed sirloin with black olive crust, Yukon gratin, red wine reduction, caramelized carrots), but he commented more than once about how perfect it was. Because our guts were not yet busted, we soldiered on into dessert territory. Our server highly recommended the hazelnut dark chocolate cake. I wish we'd ordered two. Instead, I thought to try something different, so I ordered what I'd heard was the most popular dessert item, the caramelized banana s'more. I much preferred the cake, if only because I expected more chocolate and graham-y goodness, instead of all that marshmallow. Then again, I could have just been full.