Tandoori Hut: All the Curry You Can Eat

The buffet is heavily advertised on the exterior of Tandoori hut. "All you can eat" for $8.99 at lunch and $9.99 at dinner. For potentially heavy eaters, the value to be extracted from such a deal is immense. 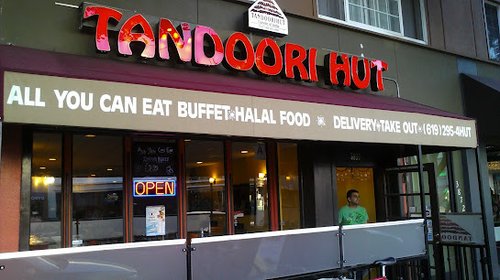 The plain decor of the restaurant reflects the low cost of the buffet, and other touches like plastic dishware reinforce the image that Tandoori Hut is not trying to muscle in on the upscale Indian dining scene that the Monsoon Group has on lockdown. Perhaps this is just as well because the affordability of the buffet may fill the "anything but a burrito" category of cheap eats.

The long-ish buffet table had rice, a few appetizers, a good selection of the house curries in meat and vegetable form, and a few morsels for dessert. Everything was in great shape and seemed to have not been sitting around too long. Indian food keeps well in a chafing dish, but truly ancient curry is never pleasant and Tandoori's looked fresh.

The food was ultimately on the good side of adequate, although a goat curry "with bones" was better than the other dishes and showed a bit more deviation from the norm than the ubiquitous saag paneer and chicken tikka. 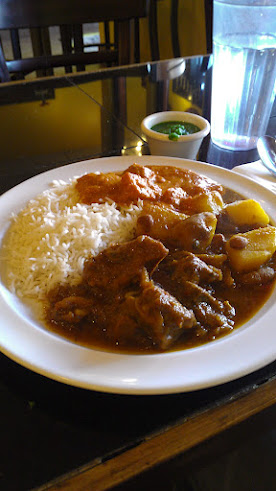 Ultimately, some of the most important points were covered: the rice was good and fluffy, the naan bread that came out of the kitchen (freshly baked to order) was excellent, and there was plenty of protein in the curries. Even merely average curry is delightful over really good rice or hot, tender bread.

The menu extends beyond the buffet and is actually massive in scope. As is usually the case in the US, the dishes are primarily from the culinary styles of northern India where meat consumption is more common and the savory flavors are more immediately recognizable to American tastes.