I am loyal to the North Park coffee shop where I spend the most hours sucking down coffee and hunkering over my computer at a table in the corner. But every now and again, my travels take me elsewhere, and I stray. Last Tuesday, I found myself staring in the window at Café Cabaret in Normal Heights, wondering how the coffee is and whether they have a breakfast sandwich like the one my buddy Nick makes me at the other joint.

Turns out they do have a breakfast sandwich. But unlike the one Nick makes, which will only make me fat if I eat it every day, this one will kill me.

They call it the Mission Link: one egg, two sausages, Swiss cheese, and mayo on a hamburger bun – for $6.49. 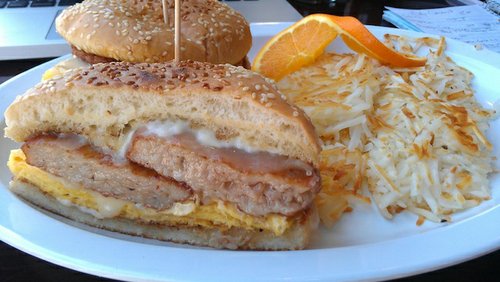 The hamburger bun didn’t thrill me, but it disappeared into the background at the first bite of those sausages (oh, the sausages!). Cheese, mayo, egg, it was all a stage for the meat, which was salty, meaty, juicy and. . .so naughty.

I tried to eat only half.

As for the hash browns that came with the sandwich, they were a nice idea (Nick doesn’t give me hash browns), but they were tasteless and under-browned.

Coffee? Yes. Not the quality of that other place, but for $2.00 and a free refill, it’s less expensive. 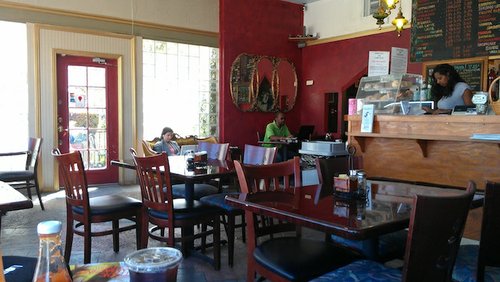 The casual atmosphere and the free wifi (as long as you purchase something every two hours) put it on my list of new favorites, but it will only remain there as long as I can refrain from ordering that dangerous breakfast sandwich too often.

Do they bug you if you sit more than two hours? How?

Really, I'm asking. I like to hit the Wi-Fi sometimes, and of course I purchase something. But then I wonder... "I purchased only a coffee...I guess that buys me two hours" or "I just spent $8 on a meal, I can sit here for the afternoon."

Of course there's no sign on the wall that says anything. It's all subtle between the patron and the establishment.

This would be a good subject for you to address specifically!