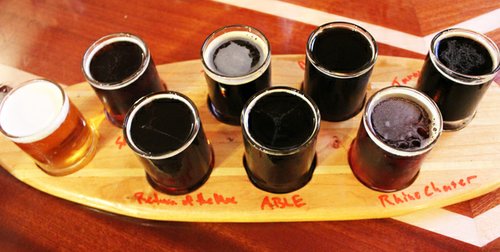 The first thing that caught about the taster flight that caught my eye was that there was only one beer that wasn’t brown. Wait a sec—San Diego’s known for hoppy IPAs and refreshing beers that pair well with our perpetual sunshine. Who turned out the lights?

Answer: Miyashiro, who says Pizza Port makes a bunch of great IPAs, but refuses to go down as a one-trick pony. Makes sense. Pizza Port makes everything from mild brown ales to hop bombs to thick imperial stouts. And, as their unmatched number of Great American Beer Festival award-winners attests, they bring high quality craftsmanship to all of them.

Breweries are allowed to enter a total of 10 beers for WBC consideration. Of those, eight will count toward tallies determining the Best Brewpub winner. So, rather than max out on the entry front, he decided to focus on eight styles. The result is a field that includes a pair of porters, two stouts, a black pale ale, imperial red, brown ale, and low ABV English pale ale.

Several of those, Skidmark Brown Ale, ABLE American Stout, Rhino Chaser Imperial Red Ale, and Z-Man Stout, medaled at GABF in 2011, earning Pizza Port OB the Small Brewpub of the Year designation. All of them are tasting as good, if not better, than they did last year.

Same goes for Bacon and Eggs, a beer Miyashiro bills as an imperial coffee breakfast porter. I’ve had cups of coffee that didn’t taste as much like coffee as this beer. It’s dark and roasty, but not the least bit thick. That lack of viscosity is present in all of Miyashiro’s entries. Even those with higher ABVs and plenty of malt are well attenuated, which keeps them from weighing down taste buds. Bacon and Eggs has never placed in the top three, but Miyashiro has a soft spot and high hopes for it. Hopefully, this will be the year it gets its due. It’s a truly delicious beer.

So, too, is Return of the Mac, a porter brewed collaboratively with Maui Brewing Co. head brewpub brewer Kim Lutz, who came to San Diego last year to help Miyashiro create this medium-bodied ale infused with complimentary flavors of roasted macadamia nuts and cold-pressed coffee provided by Heather Brisson (currently at Bird Rock Coffee Roasters, but at the time she was with North Park’s Caffé Calabria). The roast on this one is much lighter than Bacon and Eggs, allowing the nuttiness to come through in tandem with more of a café au lait coffee character versus B&E’s espresso profile.

Though the most unassuming of the bunch, I wouldn’t count out Foam Ball, an English pale ale that’s available on nitro at the brewpub. It’s the kind of beer you can drink in large quantities over lengthy periods of time without becoming the type of overly inebriated, loud mouth nobody enjoys. It’s also the type of “crossover” beer that will appeal to and likely win over drinkers whose beer-drinking has heretofore been limited to Miller, Coors and Budweiser.

No matter how Pizza Port’s OB outpost does at WBC, local drinkers can count themselves winners to have this octet of fine beers available in their own backyard. Pizza Port Ocean Beach is located at 1956 Bacon Street.