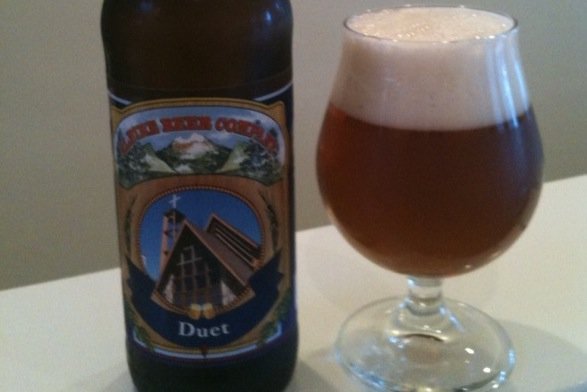 Alpiners Pine No More -- You Can Duet

Several weeks ago, I delivered some bad news for local hop-heads, reporting that Alpine Beer Company would no longer be able to get their hands on enough Simcoe hops to produce one of their best-selling brews.

That beer, Duet IPA, has always been scarce, so fans are used to putting in some work to get at it. But the thought of having absolutely zero to sleuth out equated to a full-scale crisis for these folks.

With my last two posts about Alpine being negative notes about the fact that this and another beer (Ichabod pumpkin ale) would not be offered for the next year, it’s refreshing to write this post announcing that Duet will, in fact, be available…and soon. Like many good developments in San Diego’s beer scene, it comes as a result of camaraderie and collaboration.

As it turns out, Green Flash Brewing Company was in need of some Nelson hops and Alpine, the producers of another popular hop-stoked quaff called Nelson IPA, had plenty to spare. As a result, the companies were able to trade in order to symbiotically meet each others’ needs. It’s only fitting that such a harmonious duet will provide the basis for Duet’s return.

You know, I'd heard about Duet, but I've seen a lot of it lately at my not-so-secret liquor store. I grabbed a bunch a few weeks ago, thinking I was lucky, but I've kept seeing it there since then. I've seen it pop up a few times at Whole Foods, too, though it usually moves in hours when they have it.

This probably explains that. Nice to see the brewers helping each other out.