Kenneth Sewell is the author of Red Star Rogue: The Untold Story of a Soviet Submarine's Nuclear Strike Attempt on the U.S., the book that served as the inspiration for Phantom, which opens Friday. He also served as technical advisor on the film, which was shot here in San Diego, mostly on board the San Diego Maritime Museum's Soviet B-19 submarine. That's also where we sat down to chat about the experience, up front near the sub's single torpedo. Sewell brought an expert outsider's eye to the proceedings, and it made for a good conversation.

Matthew Lickona: How did you come to be involved with Phantom?

Kenneth Sewell: The director, Todd Robinson, read my book, and I got an email from him on my website saying that he really liked it. We started working on a script, and then he took it over to Cannes and sold the foreign rights, made some money. Somewhere along the way, he got Ed Harris to agree...and investors started getting more interested.

ML: And then you got hired as a technical advisor?

KS: I was supposed to be here in San Diego for eight days. But they were having trouble operating the submarine: getting the sub air-conditioned, running cables. I got the cables run, got the lights lit, and they said, "We need you to stay." I ended up staying here for eight weeks. I came in one morning, and they had a hole in the ballast tank; the sub was tilting ten degrees. Someone had to go down to the tank and patch it, and we pumped it back up and got the sub upright. I stayed a week after everybody else, putting the sub back together. We had an awful lot of blood in the bulkheads from the squibs.

ML: What else did you do for the film?

KS: I was mowing my grass, and the phone rings, and it's David Duchovny. I designed his tattoo. I went and visited him at this hotel - I didn't really know it was a hotel, it didn't have a sign. It was very plush. They said, "Go up to this room and knock three times" - apparently, the staff didn't know he was there. I walked in, and it was pretty apparent he had been there for a couple of days and had not left the room.

We talked and talked about the character. He asked me, "What about an eye patch?" I said, "That would look pretty cool, but you're playing a commando, and depth perception is a pretty good trait to have." So we went with a tattoo. I said, "The [Tom] Clancy books have this character, John Clark, he's an ex-SEAL, a real tough guy." I said, "This character is very similar. Clark was part of SEAL Team 6, and he had a tattoo of a seal with a ball that had a 6 on it. Our bad guy could have something similar." I gave him a red star with a wolf head on it. The director said, "Damn, not a tattoo. We'll have to put that on every day." But I said it was better than an eye patch, especially when you digitally reverse a scene and the eye patch is suddenly on the wrong side.

ML: Your expertise is submarine stuff, though, right?

KS: When it turned out the special effects were going to be a little too pricey, I built a 23-foot model of the sub in my garage in Ohio and brought it to Burbank. I got the plans for the Foxtrot sub, and I built it to scale. They said, "Can you just build a 10-foot model?" but I said, "No. You can't make a water droplet any smaller than it is, and you can't make a wake any smaller than it is. All you can do [to keep scale] is make the model bigger." It's what you see on the poster. It cost just $23,000 to build and ship over, which meant we had a lot more money to spend on special effects. I wanted to build a 50-foot sub that you could put a man in and put it in the ocean. But directors like to shoot in tanks - conditions where they can control everything. I was going to build a November-class sub, too, but time was against us.

ML: All in your garage?

KS: It's got a wood keel made with 2x6s. I cut the ribs from three-quarter-inch plywood. Then we took 5 mil plywood and cut strips for the hull. We laid them laterally, so they looked like plates. I sat down and watched every submarine movie before I built the thing, and every model that they use looks like it's brand new, like the first sub I was on when I was in the Navy. But if you look at the hull of the sub in the Maritime Museum, it looks like crap. The pressure of the water bends the plates - they're made to bend. We laid the plywood, filled in the gaps with wood putty, then wrapped wire around the sub to mimic the appearance of the ribs [between the plates]. Then I coated it with fiberglass, like you put on a boat. Finally, we textured the hull and painted it. My son helped me; he's an artist, too.

ML: So much for the exterior.

KS: Inside, I put trolling motors in with extended shafts for the propellers. And I had ballast tanks with valves. We had remote controls to open the valve so the sub would sink, and then to close the valve and blow air so that the sub would rise. I drove it two-and-a-half days from Ohio to Burbank, the Fantasy II Film Effects studio. The place was like a Hollywood junkyard. There was a million-gallon pool in the back, and a big warehouse with all these props from the movies lying around. They had a couple of wooden shelves in this old, ratty office, on them were two Oscars, an Emmy, and three Saturns. They're covered with dust, and the guys says, "My grandpa won this Oscar for The Time Machine, and my dad won that Oscar for The Terminator." I'm in a corner of the shop putting things together, and there's this Terminator-bot. It's ten feet tall in the movie, but it was really just four feet tall, and it was just sitting there.

ML: So you built the sub.

KS: I also built two half-scale torpedoes torpedoes with motors. And I've been a diver since '65, so I worked in the pool to catch them after they got launched. There would be this fog of water, and all of a sudden this thing would be coming at me. We'd catch it and it would force us back six feet, and we'd stop it. It was spooky; I never got used to it. We also had to build torpedoes from cardboard for the torpedo room. When we got down here, we found the sub had only one torpedo! So I sketched one and called my son. We put a prop on it from one of the old boats in the museum, and we decided to leave them in the tubes after shooting was done.

ML: Is there anything you didn't do?

KS: I got the nickname "The Dos Equis Man" during the shooting. I was working with the sub, doing the models, helping with directing...But the whole movie industry is nuttier than a fruitcake. Think about this: you want to buy a car from me. I say, "Fine," and I build a factory, hire people, build one car, give it to you, and then shut everything down. That's why movies cost what they do.

ML: What was cool about the project?

KS: This was the first submarine film actually shot inside a sub, because digital cameras are small enough now, and because we can manipulate the image in post-production. We brought a lot of attention to detail to the project to get it to where it was really accurate and a little gritty. Usually, the inside looks too clean and well-lit. 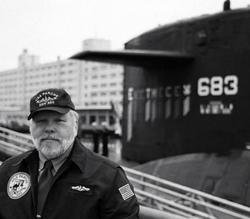