Bless Me, Ultima is the film version of the novel by Richard Anaya, and it tells the story of Antonio, a Chicano boy in 1940s New Mexico who must contend with many influences as he seeks to make sense of his world. Chief among these is Ultima, an elderly curandera who comes to stay with his family at the beginning of the film. Ultima is a healer - she knows which herbs are good for which maladies. But she is also more than that. I spoke with Luke Ganalon, who plays Antonio, and Castulo Guerra, who plays Tenorio, the film's villain.

Matthew Lickona: Was Ultima a witch?

Luke Ganalon: No, she was not. She was a curandera.

Castulo Guerra [to Ganalon]: Oh, come on. You are the one who sees the needles fall. Remember? They say, "Does anyone have the holy needles? A witch cannot pass through a doorway marked by the holy needles." So they stick them in the doorway, and she passes through. But after everybody is gone, the needles are down on the ground. That leaves a big question mark on your face. I'm not contradicting you. But that's the question: what is she? She's a curandera, but when you perform an act of exorcism as she does, you are entering another terrain.

ML [to Ganalon]: What do you think Antonio makes of those fallen needles?

LG: I think he's questioning, but he still believes that she's a curandera. She's good, not evil.

ML: But she does have powers? It's not just a matter of knowing what herbs to gather? She has magical...

LG: Yes, with the universe.

CG: I like that he doesn't take her powers for granted. He doesn't think to himself, 'I've got me someone with powers.' It doesn't change the way he is in the world. And she doesn't carry herself like a woman of power. She just walks the earth.

ML: She does bend Tenorio's curse back on his family.

CG: She herself says, "Tamper with fate and suffer the consequences." It goes for both her and Tenorio. Tenorio and his daugthers tamper with fate by putting a hex on one of the family members. But when Ultima reverses it, she also tampers.

ML: Did her connection to the owl, which is almost like her familiar, make sense to you?

LG: Yes. It made sense how her soul... She mentioned how it came from a her mentor. He passed it on to her. He had powers and she learned from him. And I learn from Ultima - it's like I have a power when I sort of take Uncle Lucas's pain [during the exorcism] and destroy it, along with her powers. It's a big spiritual part of it, having to do with her soul.

ML: Have you read the book? Why do you think the poster for the film calls the novel controversial?

LG: I read the book after we made the movie. It does talk about good and evil. It's been banned and forbidden. But in my opinion, it's a great American story about Americans during an American war.

CG: In certain schools, it's been banned for the religious aspects. I had a radio interview, and someone called in and said, "I hear it's about Satanism!" It's not. It's about a people, in a town, and the earth, and things happen. Ultima never says to Antonio, "I want you to question the Church" or "I want you to question your teacher." Never. Because she's not in the negative. Her ultimate blessing is, "I bless you in the name of all that is good." Let's go to the Bible. A priest called in and said, "I can quote instances where Jesus healed with mud, and where herbs were gathered and natural things were done." That wasn't Satanism. I think it's immature to see the story as controversial. Antonio is on a quest - he has to question, not by mandate, but because that's the path. It's not about the loss of innocence, but the story is about a rite of passage, an ordeal.

ML: What is his quest? What is the chief struggle for him?

LG: How dark events and evil - the evil that men do - come to figure in a world where he's been given one description by the priest and another description by his teacher. He comes from a very moral family - his mother insists that he call Ultima La Grande. But his father is a drunken dreamer - he wants to go to California, he doesn't want to stay where he is. His brothers come back from the war pretty messed up - we see that today - and they taking to drinking and going to the [whorehouse]. His mother has angst over her sons who went to war, and she would like Antonio to stay and be a priest. And in the film, Antonio and Tenorio are mortal enemies. To put a child up against a monster on a big, black horse with an eye patch, a guy who is ferocious and out for vengeance, that's what's magnificent about Anaya.

ML: How did you approach your characters?

LG: I think we're a lot alike. I think we both hope to strive in school. We both have questions about life and religion. We both have a strong belief in God. And we both love spending time with family and friends. That helped me to sort of connect with Antonio.

CG: I had to dig deep into dark corners, to bring up stuff and say, "This is going to be Tenorio." He wants to consume the life of others. He's going to be hoist on his own petar, but he doesn't care. He's going to the end; he's already lost the battle.

ML: What attracted you to the film?

LG: I just really wanted to bring Antonio to the film - the truth of it, the honesty. This is my first film, and this is my dream, to be in this business. It was an honor to be in such a great film with such a great story.

CG: I come from the north of Argentina, the Andean region, where there are many indigenous peoples. They are mountain people. When I was six, I had susto - fright - and I would wake up screaming in the middle of the night. Nobody said, "Take him to a psychiatrist,' because I was six. They said, "Take him to Dona Catalina." She was a curandera. She was little and dressed in black. She put me in a blanket over a fire and burned some incense. That was part of my culture. That's why I took to the story of the book. I had never heard of the book until my agent told me they were casting the film, but when I read it, I thought, "How come I never came across this?" 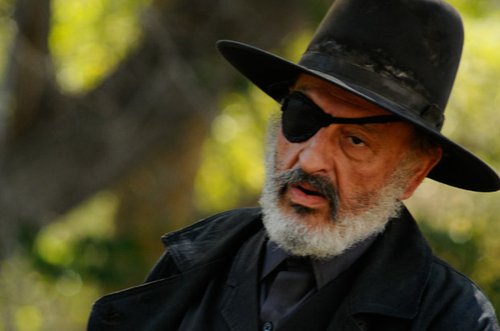 So many years after the novel "Bless Me, Ultima" was published, it is made into a movie. I hope New Mexican author Rudolfo Anaya is alive to benefit from it.