When I see a sign or sandwich board advertising food that's "the best" or "world famous," it's almost impossible for me to decline putting those claims to the test. The sign out front of Park Boulevard Deli in University Heights brazenly proclaimed that the combination liquor store/grocery/deli's sandwiches had been "voted #1 sandwiches in town." It didn't say by whom, but I figured I would answer that challenge. 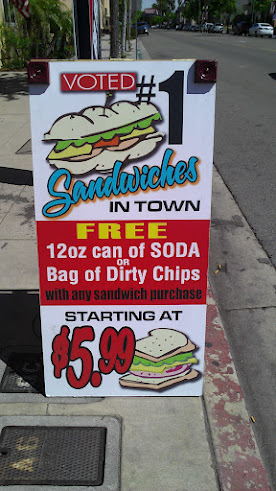 Inside, the deli occupied a space along the left side of the building. To the right, shelves of snacks, coolers of beer, and random groceries. I wasn't alone. Three other guys had lined up before me and ordered sandwiches. I asked the woman working the deli for a "torpedo" ($6.99) that had salami, ham, and cheese on it. She didn't ask which bread I wanted, as I assume the sandwich has to come on a submarine roll to justify its name.

"Everything on it," she said in a way that wasn't a question.

I complied, grabbed a coconut water, a little sesame cookie, and paid the man behind the counter. He told me my sandwich would be brought out when it was done, so I went out to the sidewalk seating and watched the world go by for a minute. 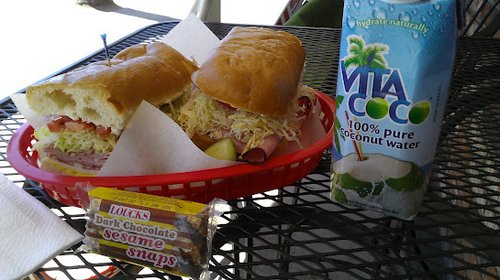 As sandwiches go, the torpedo wasn't half bad. I would say that it was definitely the best sandwich on Park Boulevard between Meade and Adams, although"#1 in town" was an overstatement. There was plenty of mustard and meat, but the shredded lettuce that broke free with every bite was a little annoying. The bread had a fun, chewy texture and an unexpected sweetness, but it didn't taste stale. The sesame crisps were excellent, however and I may snack on more of them in the future.

Throughout my meal, the guy who had been working the counter kept stepping outside to get in animated discussions with a host of mildly nefarious characters who came and went freely. He swore emphatically, but I had a hard time discerning what his problem was. Considering the niceness of the neighborhood, the cast of players who hang out in front of the deli--perhaps because of its function as a liquor store--is much less savory than the University Heights average.

I guess you could call it dinner and a show.