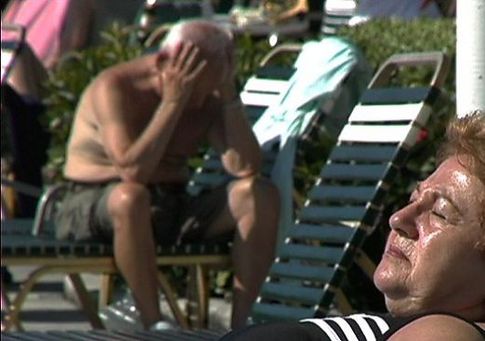 If the above image does not convince you to see the senior-center documentary short "King's Point," I'm not sure we can be friends any more.

Look, I'm not a fool. I know you're probably not thinking, "Woo-hoo! Friday night! I am gonna go watch the hell out of some short documentaries that boldly confront the challenge of just being alive!" But you should, because they're awesome, and they got nominated for Oscars, and it's not like you really want to see another Die Hard sequel.

Talking of which, Bruce Willis joins the Stallone-Schwarzenegger club of Old Dudes playing Old Dudes who perform like Young Dudes in A Good Day to Die Hard. Scott was not impressed.

Did you grow up shivering with delicious fear at the scary VHS covers of your local video store's Horror section? Do you find said covers faintly hilarious now, but also secretly awesome? John Dies at the End may be just the film for you.

Did your boyfriend make you see the zombie romance Warm Bodies as payback for you making him see all those vampire-romance Twilight films? Reclaim the monster-love upper hand with the witchy romance Beautiful Creatures!

Are both you and your boyfriend tired of supernatural romances? Do you long for the simpler days of Nicholas Sparks romances? You're in luck? Safe Haven opens today.

Oh, look: the poster for Escape from Planet Earth has Dreamworks face a-plenty. Now if they could have put it on the cyclops, that would have been impressive. The fact that they didn't screen this one for critics? Not too super-surprising.