Breakdowns, blow-ups, and boners from the Warner Bros. vault 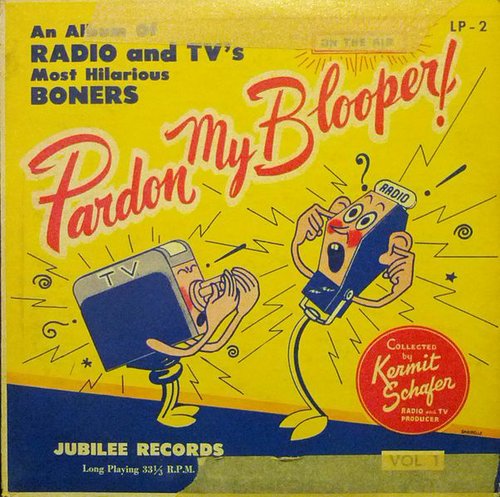 Television's last great gasp of inventiveness came when Kermit 'Mr. Blooper' Schaefer passed the boner baton to Dick Clark. Forget about balls dropping or kids dancing on the bandstand; Dick Clark's greatest contribution to American culture was the recycling of the TV's garbage into a weekly series.

The first blooper of record took place in 1931 when radio announcer Harry Von Zell introduced the President of the United States as "Hoobert Heever." It was around the same time Schaefer began his career as a professional boner collector.

Schaefer was a sham, a world class fraud who tampered with history. Many of the bloopers contained in his LPs went out over the air live and no audio recordings existed. What was there to prevent Schaefer from bringing a group of actors into the studio to recreate the moment? 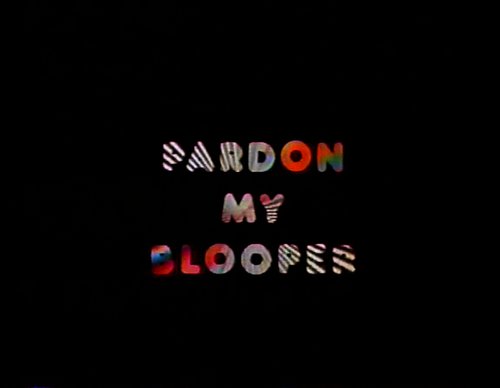 Shhaefer began packaging audio collections of his "bloopers" in the 1960's which were later transformed into a theatrical feature, Pardon My Blooper (1974). The "film" has never been released on DVD. Big Screen lifer, Colonna, bumped up a VHS tape to DVD for me and a copy rests comfortably in my archive. Only the audio portion of the film is available on YouTube.

At times, Schaefer flat out lied by dramatizing incidents that never occurred. 'Uncle' Don Carney, host of a popular 1930's children's radio show, spent a good portion of his life defending himself against Schaefer's slander. In Schaefer's version 'Uncle' Don, unaware that his microphone was still hot, let slip, "We're off? Good, well, that oughta hold the little bastards!" There is no factual evidence that this incident ever took place, but that didn't stop Kermit Schaefer from cashing in.

Schafer died in 1979 and the title "Keeper of the Bloopers" went to Dick Clark. In no time, he hired Ed McMahon to co-host TV's Bloopers & Practical Jokes, a weekly digest of mistakes culled from movies and TV shows. As if flubs weren't enough -- and in the interest of boosting ratings with celebrity appearances -- Dick included a weekly practical joke segment.

It was here that I was first introduced to bits and pieces of the legendary Warner Bros. blooper reels. Made only for the eyes of those whose names were on the invite list to the studio's annual Christmas party, these reels were never intended for public consumption.

Here are some of the biggest names and brightest stars in the Hollywood firmament flubbing one line after another. You'll find goofs from Bogart in The Maltese Falcon, Bette Davis as Jezebel, Errol Flynn in The Adventures of Robin Hood, Edward G., Gary Cooper, Cagney, Carole Lombard, Claudette Colbert, and take after take of Ronald Reagan unable to put on his pants.

All 9 of the Breakdowns and Blow-Ups reels can be found here. Note to purists: they have all been restored and released in their entirety on Warner Home Video. Breakdowns of 1938 is contained on the Blu-Ray pressing of The Adventures of Robin Hood and Breakdowns of 1941 can be found on the 3 disc Maltese Falcon collection. The rest appear on Warner Gangsters, Vol. 2 and The Humphrey Bogart Signature Collection Vol. 2. The super-rare Termite Terrace editions of Breakdowns are available on the The Looney Tunes Golden Collection, Vol. 6.

Nearly as golden as DeNiro: