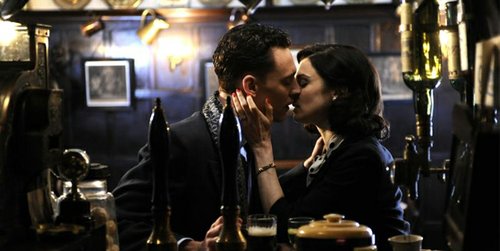 As you well know, David Elliott does much of the real work around here. I'm usually just the messenger, here to draw some attention to one of the few genuine stylists still working in movie criticism. FOR EXAMPLE: With The Deep Blue Sea, writes Elliott, director Terence Davies "has taken upscale dramatic soap and re-lathered it masterfully." One quibble: when he warns that "odds are that the people who missed Rachel Weisz’s splendid work in Agora, The Whistleblower, and The Constant Gardener will also miss this one," he leaves out The Brothers Bloom. But then, not everybody was a sucker for that one's spiritual screwballing the way I was. Everybody, however, should be a sucker for Rachel Weisz. Anyway, this sounds dangerously like one of those movies that tells the truth about love - always a painful proposition, but often, a rewarding one.

He's not quite as fond of The Raid: Redemption. "Combine the aesthetic of Scarface" - that is, "crass, rampant violence" that "stylizes the story in a reductive and cartoonish way - with the endless slurry of martial arts movies spilling from Asia, and you will finally get down to a Neanderthal pile like The Raid: Redemption." But I heard it was full of kick-ass action! What's your problem, dude? Is the music too loud? Elliott respond with some questions of his own: "Do young guys who consume this stuff care that nothing shown is worth dying for? That the reunion of two brothers is a bad joke? That 'redemption' is never remotely possible? This thing is simply more dung for dudes." That bit about the impossibility of redemption is troubling, what with it being in the title and all.

The Italian "what a drag it is getting old" comedy Salt of Life rather depends on whether "you, like me, you enjoy [director-star] Di Gregorio’s blithe sag, his basset hound eyes, his aura of civilized decay stretching back to the Roman Empire." If you do, "there are some amiable chuckles." Yay, Italy!

And Detachment? Maybe Adrien Brody should stick to razors and beer (and I say that as someone who just admitted his love for The Brothers Bloom). "Poor Brody tries so hard, looking like a sweet, gaunt statue of guilty agony in a medieval cathedral (up near the gargoyles)." If your effort shows, you ain't acting.

In the capsules: The Hunger Games, Intruders, and (really?) I Kissed A Vampire.