It's not as riveting as this, and nothing will never touch this, but Marty's latest self-directed performance, this time as a pitchman for the iPhone 4S's "intelligent personal assistant," is now officially the Best Picture of 2012!

Some of His line-readings (particularly "Are you serious?) seem over-rehearsed. The tension one usually associates with a Scorsese opus is also lacking.

On the plus side, there is a sublime insert shot of Marty in the side-view mirror, and the following grab should make a suitable desktop image and Facebook banner. 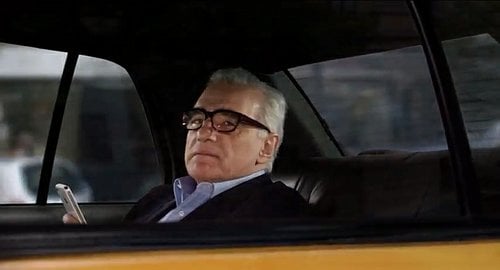 Personally, I liked it better when Marty threw phones, not made nice to them.

What's the matter, Apple doesn't have enough dough to spring for a DeNiro cameo? Never one to tell Marty how to direct, there should have been a pull-back at the end to reveal Travis Bickle adjusting his Mohawk in the rear-view!