When in doubt, Stooges!

When in Hollywood, as was the case during the recent Thanksgiving holiday, I feel it my duty to take in at least one 35mm revival. Since it was a holiday weekend, I didn't expect to find much in the way of celluloid rarities. Surely there was something more to behold than DCPs of crowd-pleasing, oft- revived staples like The Wizard of Oz, Singin' in the Rain, and Gone With the Wind. 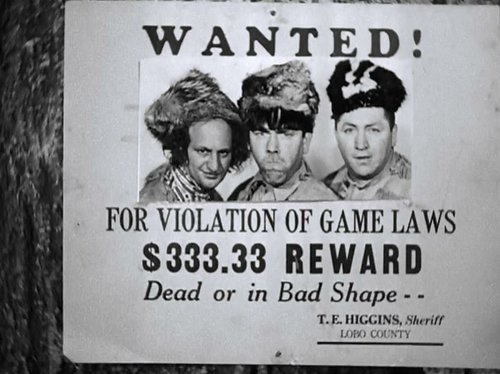 It wasn't the first time that I had seen the boys projected on a screen. The shorts were originally designed for theatrical distribution, but like so many devotees of my generation, my first exposure to the Stooges was on television. Once the shorts hit the small screen in the early '60's, it was virtually impossible to see a Stooge two-reeler play before a theatrical feature. (I do recall a print of the Besser gem, A Merry Mixup -- with Spanish subtitles, no less! -- opening some feature or another at the Varsity Theatre in Evanston, Illinois.)

My first non-televised exposure to the shorts came thorough a cartel of collectors who combined owned 16mm prints of approximately half the Stooge oeuvre. Many a night was spent in friends' basements booking private marathons, threading print after print onto 16mm Kodak Pageant or Bell and Howell (never an auto load) projectors.

One of my earliest (and most memorable) exposures to the boys in 35mm was part of a compilation of Columbia shorts called The Three Stooges Follies that was released to theaters in November of 1974.

The festival held its Chicago premiere at, of all places, the majestic Granada Theatre, for two consecutive Friday and Saturday midnight screenings. The Stooges projected on the Granada's 5-story screen is a memory to be devoutly cherished. Even a dupey-looking 35mm print projected in the wrong aspect ratio (the chowderheads screened the shorts in 1.85:1) could not prevent this from being a night to dismember.

When the program was first announced my friends and I were expecting 120 minutes of non-stop eye-poking, fast motion, insipid doubles, and pulling of Larry's hair. If nothing else, show some of the shorts that were banned from TV due to their violent and/or politically incorrect nature.

The gathering of about 400 was unruly from the outset. There was so much pot smoke in the 3,500 seat auditorium that the place smelled like a 5 alarm fire in Tijuana. The crowd also made one thing clear: all Curly, only Curly! If so much as one frame of Shemp, or God forbid that Nancy Boy, Joe Besser hit the screen, they were going to torch the place. I thought it wise to keep my pro-Shemp sentiments to myself.

The houselights dimmed, the curtains parted and the crowd went wild. Of the three Stooges shorts screened only one, You Natzy Spy, was on the condemned list. The other two were Yes, We Have No Bonanza, a western parody that further hammers home the point that Jewish comedians and the Old West don't mix, and the crowd-pleasing Violent is the Word for Curly, a Stooges musical that features the excruciating Swingin' the Alphabet. ("B-A bay, B-E bee, B-I bicky bye...")

The crowd was not amused. 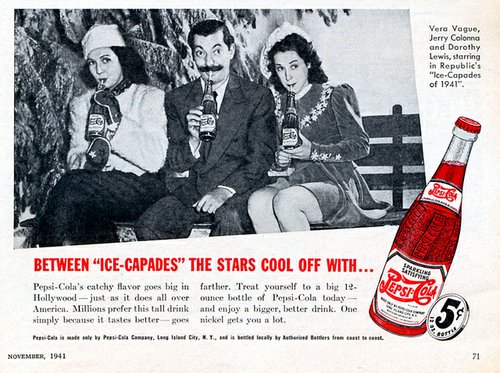 Interspersed throughout the proceedings were several Columbia shorts that can best be described as buzzkills. You don't gather together a bunch of Stooge-potheads eager to see three four-foot tall Jews beat the crap out of each other only to suddenly throw sand on the tracks in the form of Vera Vague and an endless Batman serial.

There was also a Columbia two-reeler featuring Buster Keaton. My introduction to Keaton arrived relatively late in my cinematic upbringing. It would be another six years before a 35mm retrospective awakened me to the single greatest comedic force ever to hit cinema. There is Buster Keaton, and there is everybody else. The Follies came at a time in my life when my only exposure to Buster had been in the Frankie and Annette pictures. I didn't know Sherlock, Jr. from How to Stuff a Wild Bikini.

The only thing that kept the party alive were the rude and lascivious heckles the well-baking crowd hurled at the screen. There was not so much as one peep from the crowd during the Vera Vague short that opened the show. By the time Keaton's Nothing But Pleasure hit the screen, the room was on fire. 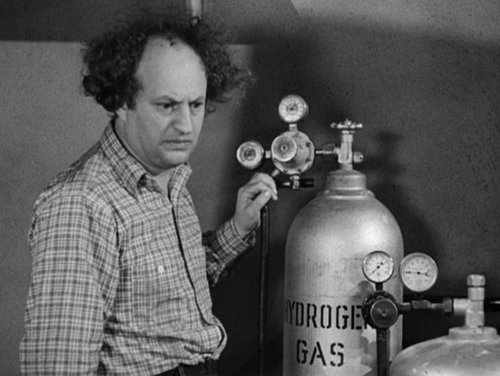 At one point Buster flings his wife over his shoulder and stares at her backside. As though perfectly dubbed by one of Columbia's expert sound technicians, a member of the crowd yelled, "GAS ON!," a reference to one of Larry's more arcane lines in Dizzy Pilots. The crowd cheered and for several minutes afterward, anytime a character stood up, sat down, or bent over someone in the crowd yelled either "GAS ON!" or it's companion line, "GAS OFF!"

The evening's most venal moment was held for the nightcap. The pot was wearing off and euphoria had long been replaced by disappointment. After the crowd realized that they had in a sense been taken in, the last thing they wanted to see was America Sings With Kate Smith. There, on the expansive screen, stood the equally far-reaching Miss Smith. The crowd could take no more. After a chorus of Over There, one of the more erudite quipsters in the crowd let loose with, "Hey, Kate, why don't you come over here you fat ugly ****!" The band played us out with "God Bless America," the film ended, and we got to see the tail of the reel run through the projector, leader and all. The projectionist was either asleep or had an aneurysm.

The crowd in attendance for this year's Thanksgiving show in Glendale wasn't quite as subversive. Glendale was my home for a brief period in the mid '80's and I can recall at least a half-dozen single-screens gracing a one mile stretch of Brand Blvd. Only one remains, the Alex, and it is by far the jewel of downtown Glendale.

More than half of the Alex's 1,381 seats were occupied by hardcore imbeciles, Stoogiologists of the first degree thrilled to be in a room with like-minded morons eager to devour every fine-grain frame of 35mm mayhem. I was accompanied by a pair of hair-pulling mavens (and frequent contributors to The Big Screen comments section), John Schultz and Matt Wilson.

Sony struck brand new prints of five Stooge opuses. Four featured Curly: three standouts (Pop Goes the Easel, Three Little Pigskins, and An Ache in Every Stake) and Movie Maniacs, a rare and only moderately amusing attempt by the boys at self-reflexive parody. Rounding out the quintet was Merry Mavericks, another noxious western parody that rivals Punchy Cowpunchers as the weakest link in Shemp's chain of command. 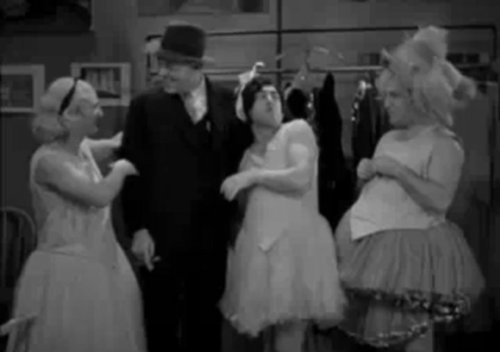 Easel-tune is by far my favorite Curly. I once owned a sparkling 16mm print and know every inch of it by heart. Nothing the Stooges can do is one-tenth as amusing what the (Del) Lord commands. Black doors suddenly appear in the blink of a cut. Moe's clip-on tie drops off in mid-shot (one can't 'retake' genius). Didn't anyone notice that the exact same painting hangs on two walls of the ramshackle set? It's a perfect Stooge excursion: the boys are in their youthful prime and Del Lord's direction, if you can call it that, renders the narrative, if you can call it that, even more incomprehensible than anything on display in Cloud Atlas.

The presentation was flawless. Every grain on the giant screen was in pinpoint focus. The most thrilling part of the evening was the theatre's functioning curtains that opened and closed before and after each short.

Complaints? At $15 a head it was agreed that five shorts were simply not enough, but if their only sin was leaving the audience wanting more, I guess I can't complain.

I did see a series of 35mm Stooge shorts when I was 13 or so with my stepdad at the now LONG GONE Bolingbrook Theatre in Bolingbrook, Ill. They played the shorts there for a week to fairly packed houses. It was one of the rare times my stepdad and I bonded. That and we bonded over Gleason.

"Violent is the Word for Curly"

This is definitely one of the very best of the Stooges shorts, the song really makes it stand out, that plus the out door filming locations. Three Little Pigskins is also excellent outside filming.....I have never seen a stooge short on anything bigger than my TV. Wish I could have gone to this.

As for Shemp, I USED to hate Shemp, but only because he could not live up to Curly, which was impossible- no on could. I now look at Shemp as a great artist and stooge, most talented behind Curly IMO.

We all grew up hating Shemp. It was a given that Curly was the superior Stooge. Shemp is a superb physical comedian and I dropped my prejudice decades ago. There are plenty of Shemp shorts that surpass Curly. One of my professors once said the definition of a clown was someone who made you laugh just by looking at them. Shemp is by far one of the fugliest actors of all time, so hideous that I have to laugh. I maxed out my number Facebook "friends," Surf. You'd love my galleries of Stooge People and something I like to call a collection of "Simply Fine" screencaps. These boys (and Bugs and Jerry) gave me some of my first laughs and I will forever be indebted.

All 5 of the shorts you saw are on TV all the time, but Merry Mavericks and Punchy Cowpunchers were both on this morning. And no stooge conversation is compete w/o the the 4th stooge- Christine McIntyre , so taleneted. When Shemp passed SHE should have been the one who took over, not Joe Besser.

Forget about Shemp and Curly for a minute. It's always been 2 Stooges plus 1. Larry is eternal!

Something I forgot about "Merry Mavericks." There was an opening sequence on the 35mm copy that never appeared in any of the TV prints I saw as a kid. I checked the DVD and it's there. There's nothing violent or offensive about the opening. They probably cut it due to length for the TV release.

And Christine M. was about the hottest Stooge woman of them all. Well, maybe Miss Lulu. Wahoo!

Christine McIntyre was more than looks, she was talented, very talented.

Did you hear her sing in Microphonies???????? She was a trained singer, a really good singer, and had the funny bone knack........she should have replaced Schemp IMO.......