Credit Sean Hayes (Larry), Will Sasso (Curly), and especially Chris Diamantopoulos (Moe) for doing their homework. Their Xerography of the boys’ lowbrow antics perfectly captures the spirit and mayhem, if not the aesthetically-challenged look and feel of the shorts.

The Farrelly Bros. deserve a band saw to their numb skulls for bringing smooth continuity, no glaring dubbed-in dialog, and a paucity of dummies, doubles, and fast motion gags to a universe where cine-illiteracy normally knows no bounds. Their only inspired, purposefully low rent move is a jarring cutaway from the Stooges to a stock footage reaction shot of deer in the woods. 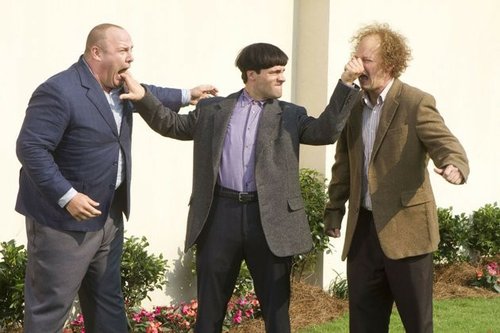 In many ways this project was ill-fated from the start. Columbia released the 200 Three Stooges shorts, not 20th Century Fox, the studio that bankrolled The Three Stooges. The film is presented as three shorts strung together, but Columbia (or The Three Stooges estate) must still hold the rights to the famous tri-head logo design. The imitation title cards aren't even close.

Sound-effects in a Stooges short are as instantly recognizable as the recurring bit-players who populate the background. A Stooges short without the proper accompanying dings and clunks is like listening to a symphony without the violence...I mean violins.

Anyone can pluck violin strings to duplicate the sound of eyes being poked or a woodblock to simulate a knock on the noggin, but many of the familiar effects have been lost in the translation. To their credit, the one original effect that remains is the interminable "glug-glug" sound while Curly quenches his thirst. This appears to have been lifted directly from one of the Columbia DVDs. 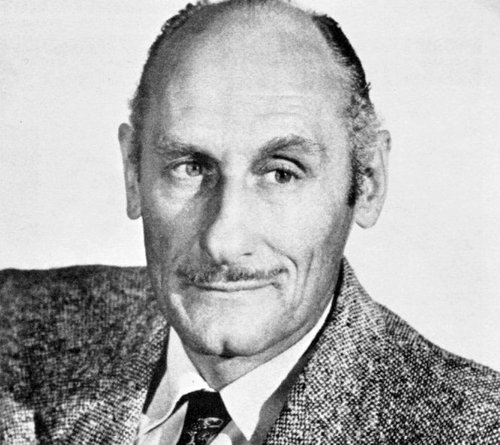 What's also missing is the Jules White touch. White "directed" the lion's share of the Columbia two-reelers and there is no mistaking his heavy hand (and flair for cringe-inducing violence). Jules White is an auteur, in the worst sense of the term, and his dirty fingerprints can be found on every frame of Stooges footage he ever committed to film.

White's idea of coverage is to first film a scene that shows the characters from head-to-toe. He would then stop the camera, move it two feet forward, re-shoot the same identical scene, insert a few close-ups, and send it to an editor. If the Farrellys are the Stoogiologists they claim to be, why not stick in a few flagrant continuity errors or ear-splitting dubs to prove they are indeed masters of their subject? Perhaps the Fox execs were embarrassed to release a film that didn't look polished, but more than likely it never dawned on the Farrellys that White was a hack.

We first meet the Stooges as infants being tossed from a speeding Chevy Impala onto the steps of an orphanage. These are Jew brothers, not The Blues Brothers and the film doesn't begin to pick up speed until the boys have matured into full-grown morons. 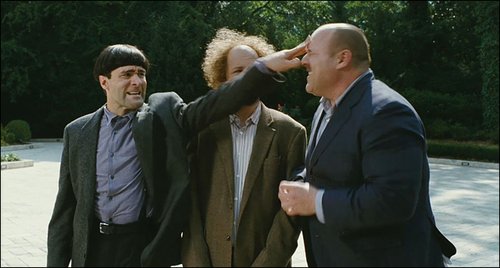 Several attempts to add a sense of topicality, something seldom present in the original films, are welcome additions. Iggy Pop and his Stooges are referenced, as is a gag about being "poked" on Facebook. A duel with urinating babies taking the place of seltzer bottles drew big laughs.

What doesn't ring true is Sophia Vergara, cast as an evil Stooge woman, hiring the boys to kill her husband. Whatever pain the boys inflict on others and themselves never sticks, and the thought of them cast as hit men violates all Stoogian codes of ethics. 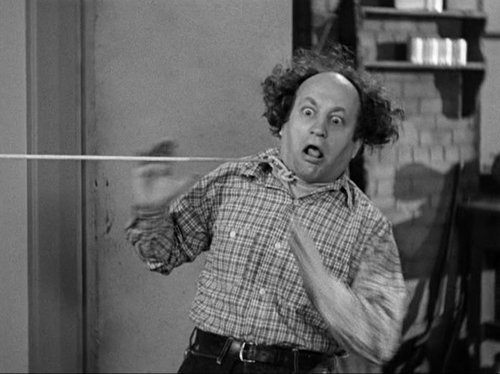 If the textbook definition of a clown is someone who makes you laugh just by looking at them, Larry Fine could very well be the funniest man who ever lived. Larry made a living doing nothing in the background and getting the shit beat out of him for it every time. Sean Hayes looks more like Don Knotts with a fright wig. The voice is frequently on-target, but I could have stood a few more inspired dopey reactions.

Curly wasn't the sharpest knife in the drawer both on and off screen and Will Sasso is too smart a comedian to get lost in the character. There are moments where one can detect Sasso's thought patterns at work, something Curly could never be accused of. 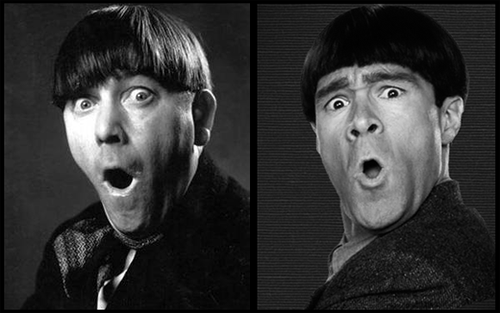 If the Academy can award Jamie Foxx an Oscar for playing Ray Charles, they should set aside an entire shelf of statuettes for Chris Diamantopoulos. At times you'll swear that you're watching a colorized Moe. Not only does he have the meanness and cruelty down pat, listen to the way he delivers his lines with the same faltering grumble as the head knucklehead. Overall, the trio does a much better job of capturing the sound, look, and mayhem of the Stooges than The Artist did imitating silent cinema.

My Stooge-addiction started at the age of four when the rights to the shorts were first sold to TV. There has always been something familiar and oddly comforting about watching three four-foot tall Jews -- any of whom could have occupied a seat at my Passover Seder table -- wailing on each other for 18 minutes at a stretch. Many parents refuse to allow their children to watch the violent shenanigans. My folks would park me in front of the set, toss me a hacksaw and a book of matches, and quietly shut the door behind them.

The Three Stooges is not the film I wanted -- it should have been rated R and geared for adults. (Women need not apply.) Something tells me I would have been just as satisfied had they done away with the script and just let the boys slap, kick, and punch each other for 92 minutes.

Is it a good film or even a fitting tribute to my childhood idols? Hell no! But, if you have even so much as one ounce of sentimental effusion for the boys, don't wait for Netflix. Wrong as it may be, I plan on seeing it again this weekend.

As for cameo appearances by cast members from The Jersey Shore, I'll give Hitler the last word.

Related link: "If I Cast 'The Three Stooges.'"

Thank you, thank you, for the portrait of Jules White. Such a noble moustache, such a visionary gaze! When a Hollywood Mt. Rushmore is finally carved near the famous sign, it must show the faces of Mr. White and his Stooges. Or if it must be an auteurist monument, let those faces be Jules White, Irving Pichel, Russell Rouse and Arthur Hiller (Ed Wood can be a pile of granite rubble at the bottom). Thank you also for bringing so many nuances to the Stooges -- say, is that the first sentence ever to include "nuances" and "Stooges"?

Remind me to kill you later!

As a certified Stooge Fanatic, watching them virtually everyday STILL (ON AMC at 5AM and again at 9AM, and on Antenna TV on Friday evenings) I will never grow old.

I only wish they had a Christine McIntyre role in the movie, since she was the 4th Stooge IMO.

Thanks to the barrage of movie commercials, my kids are pestering me to death to see this film this weekend.

Is there anything in the film that I should be prepared to explain to my kids afterwards? I'm warning you...

Or should I go with my original plan A to see it alone at a matinee tomorrow before I pick up the kidlets from school? 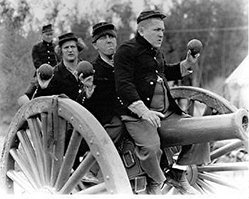 Curly, is that a cannon you're sitting on or are you happy you worked with Sofia Vergara?

What do you mean "thanks to a barrage of TV commercials?" Like you wouldn't have taken them anyway. It's a fine film for children, which is one of its main problems.

Hayes, Sasso and especially Diamantopoulos are all wonderful. They clearly are fans and did their homework, but they deserve a better movie. The Farrelly Bros. are to comedy what Ingmar Bergman is to comedy. You have to wonder how much they idolize the boys, because they get so many things wrong, from their staging to the over-sentimentality. For crying out loud, they have a whole sequence that takes place in a hospital and they don't even reference "Men in Black" once. What gives? There are some funny scenes to be sure and, like I said, the boys are perfect, but it would have been funnier to just set the camera down in one position and watch them hit each other for 90 minutes.

"Men in Black" was on this morning on AMC. "Three Missing Links" was played also, another classic.

As the boys would say: "A marvelous accomplishment!" "A prodigious achievement!" "You said it! It's putrid!"

OK, looks like you gave it one star extra for nostalgia. That guy playing Moe looks like Colin Farrell. Just saw a few episodes of Eastbound and Down. Now that's good comedy.

You're right, Scott - too much Farrelly Bros., not enough Jules White.

Had White directed this film, we would have had two nuns in a shabby office, pull the Stooges in, give the premise in two minutes, and off they went. The Farrelly's shove so many kids and nuns in our face that for twenty minutes, we had nary a slap or eyepoke.

Listen, numbskulls - the only kid I want to see in a Stooges film is an infant sucking on a nipple attached to a revolver. I want to see a pie thrown and we get donuts shoved into ears - I'm warning you!

The three "stooge" actors did a fine characterization but the supporting cast was way too contemporary. Jane Lynch had not one funny line - so why was she there? Sofia Vergara's cleavage never looked better. Brian Doyle-Murray was probably the closest the boys could come to a Vernon Dent character. Jennifer Hudson as a nun? Larry David as a nun?

Kate Upton as a bikini wearing nun? Mel Brooks did that one already.

Anyone out there think there's going to be a sequel? My guess is if the Farrelly's aren't involved, it will be more violent, less kid-friendly, and a whole lot funnier. Plus, they just upset the Catholic League with this film so my guess they won't: 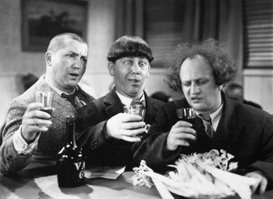 A friend on Facebook suggests that the sequel star Shemp and the two Joes. Y'know, that's not a half-bad idea. Call it "The Replacement Stooges."

i hated them both times around...but then i'm not a sadist or a masochist so what do i know

As I said in the review, women need not apply, especially one with your muscles.