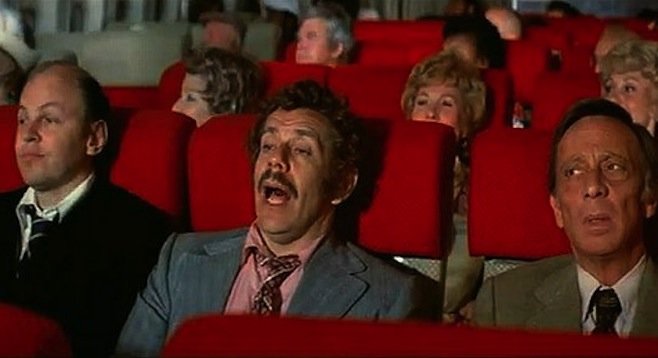 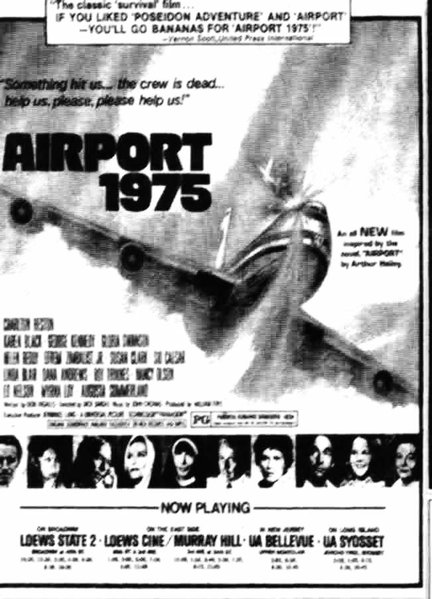 For a buck-and-a-quarter apiece, all four of them could be mine.

The Airport Terminal Pack (watching them on a computer screen could leave you terminal at your terminal) hit the bottom of my Big!Lots shopping cart in less time than it took Dana Andrews to refuel.

Airport is a tightly wound bolt of Ross Hunter dross. The producer had less taste than water. Were is not for a string of gilt-edged Douglas Sirk melodramas he produced in the '50's (Magnificent Obsession, All That Heaven Allows, Imitation of Life), Hunter would be nothing more than a fluffy footnote, an above-the-line credit on confectionery crud like the Doris Day/Rock Hudson cycle and the malignant Tammy series.

Airport was a smash -- a $10 million investment yielded over $100 million worldwide. The film barnstormed Spartacus to become Universal's biggest money-maker. Even in 1970, this type of all-star sputum, eager to court the lowest common denominator, caused its leading man, Burt Lancaster, to proclaim it, "the worst piece of junk ever made."

Hunter had nothing to do with any of the film's three sequels. His next theatrical release, the musical remake of Lost Horizon, would also be his last. The tradition of the Hollywood musical died in the early '70's. Lost Horizon, Song of Norway, and Lucy's Maim were willing participants in the murder.

Production duties on the Airport sequels landed on Jennings Lang's watch. Lang was a former New York lawyer who later set up shop as a Hollywood agent. He became vice president of MCA TV Limited in 1952 and was known as one of the driving forces behind making made-for-TV movies a staple.

Ten minutes into the film and I had to hit the pause button and run the specs on IMDB. With plotting, dialog, and screen direction like this, Airport 1975 had movie-of-the-weak splayed all over it.

Director Jack Smight tried his hand at a few big screen diversions (Harper, No Way to Treat a Lady, The Illustrated Man), before making a brief return to television. Airport 1975 joins Midway and Damnation Alley to form Smight's disaster trilogy.

Of the 38 projects credited to “screenwriter” Don Ingalls only one, Airport 1975, found its way to theatre screens. According to IMBD, “The script was originally submitted to Universal studios TV division. Executive producer Jennings Lang liked it so much he thought he could pass it off as a theatrical release.”

He did and we bit. Made for less than a third of what its predecessor cost, Airport 1975 became the sixth highest-grossing film of 1974.

On a purely historical note, Walter Wanger cost Lang his left testicle. The big time Hollywood producer used it for target practice in 1951 after he found out that the then-agent was carrying on an affair with his wife, actress Joan Bennett. Wanger pleaded insanity and spent four months in stir.

Released at the peak of Hollywood's love affair with disaster films, Airport 1975 combined all of the elements that made its predecessor a hit, give or take a talented director and/or script.

What would an Airport sequel be without a boarding list that boasts some of Hollywood's biggest names? The Love Boat.

The cast was a compendium of current favorites, has-beens, never-weres, and at least one superstar lured out of retirement. It had been 19 years since the once, future, never was Mrs. Joe Kennedy, Gloria Swanson, last appeared on screen. Her career died with talkies only to be exhumed by Billy Wilder in 1950’s Sunset Boulevard. Airport 1975 would mark Swanson’s swansong. 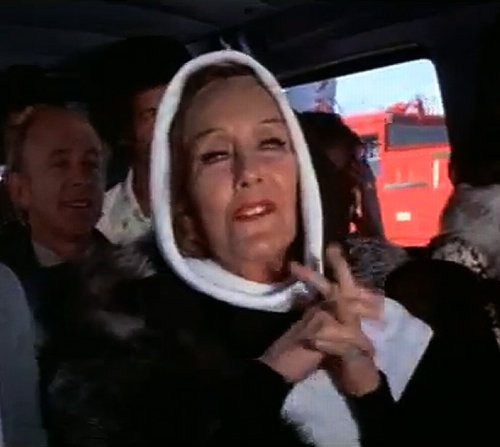 Swanson must have seen screenwriter Ingalls' previous work. Why else would the silent screen siren have insisted that she be allowed to write her own dialog? The actress explained, "I was holding out for a picture I could take my grandchildren to see, something exciting and contemporary without senseless violence." Replace violence with plotting and Airport 1975 is about as senseless as they come.

There was also a seat occupied by the offspring of Hollywood elite. Judy Lewis, who had a bit role as one of the passengers, was the illegitimate daughter of Loretta Young and Clark Gable.

Before they became small screen royalty, Jerry Stiller (Seinfeld), Norman Fell (Three's Company), and Conrad Janis (Mork and Mindy) appeared as a trio of drunken conventioneers. At the time, Stiller and his wife/comedy partner, Anne Meara, were radio pitchmen for Blue Nun Wine, hence the "You should've stuck to the Blue Nun" crack the comedian delivers in the airport lounge.

They aren't the only drunks on board. For years Myrna Loy enchanted millions as career lush, Nora Charles, in The Thin Man series. Why not dust off both her and the bottle in hope of selling a few tickets to oldsters eager for some form of character identification in a youth-oriented world?

Dana Andrews. You gas up the plane, why not the pilot?

Speaking of gin-blossomed giants, who better than a pickled Dana Andrews to be the catalyst for disaster? It's drunken Dana's mid-air heart attack that causes his small plane to collide with the 747.

Linda Blair was between "Pazuzus" when she signed on in the obligatory, pathos-wringing role of the designated impaired passenger. In Airport '77's most unintentionally funny scene, blind pianist, Tom Sullivan, is crushed to death by a flying Steinway. The Concorde not only features a deaf child, but Cicely Tyson carting her kid's soon-to-be-transplanted organ in cold storage.

Blair has a glazed look in her eyes. Either she's going to croak at any minute, or we're about ready to dissolve to a flashback.

Other uni-functional characters include Sid Caesar as the nervous passenger who can't stop blabbing, Helen Reddy as a singing nun (Debbie Reynolds' phone must have been off the hook when they tried to call her), Erik Estrada as cockpit comic relief, Susan Clark as Mrs. Joe Patroni, and Roy Thinnes as the first to die.

They were so desperate when it came time for The Concorde to take flight, the only vintage star who would agree to appear was Martha Raye. (It was to be her final film.) Raye is assigned an orange polyester ensemble and one character trait: a weak bladder. Somewhere around her third visit to the restroom, I began hoping that this would happen.

A typical example of director Jack Smight's compositional tension at its tensest. George Kennedy is surrounded by enough side-room to park both sequels.

George Kennedy is the only actor fortunate enough to have graced all four Airport films. Monica Lewis ran a close second. Her marriage to Jennings Lang assured her a first class seat for the inevitable airborne disasters to come in ’77 and ’79.

Joseph “Joe” Patroni’s (George Kennedy) first incarnation is in Airport as the top dog grease monkey at an unnamed major metropolitan hub. (Alex Hailey based it on Chicago’s O’Hare International.) With his license to taxi, Patroni is entrusted with the task of moving a snowbound 747. Commandeering the stick much the same way John Wayne would handle a rifle in a shootout, Patroni clears the runway so that pilot Dean Martin’s crippled plane (filled with crippled lives) can return safely.

Why Kennedy as Patroni? The big galoot was an easy audience-identifier. While friends and family members faced non-stop peril in the air, the land-locked Patroni was never in personal danger.

Patroni’s wife and kid are on board in Airport ‘75: this time it’s personal.

Joe's work in Airport was cause for a promotion to Columbia Airline's Vice President of Operations. Not long after alkie Andrews' mid-air fender bender, Patroni, the Al Sharpton of aviation, is apprised of the situation. It's up to Joe, Chuck Heston (never looking better than when clad in yellow Banlon and sucking in his gut), and a cross-eyed Chief-Stewardess (Karen Black) to land the mangled jet.

Which dummy was piloting the plane?

Perhaps the biggest laughs in the film are at the expense of cinematographer Phil Lathrop and his second unit crew. Lathrop was the camera operator on the legendary opening shot of Orson Welles' Touch of Evil as well as DP behind one of the '60's handsomest offerings, John Boorman's Point Blank. Phil's blinding use of fill-lights and mood lighting in the cockpit are just a few of the unintentional chuckles to be gained from his lenswork.

The pickup shots of the plane in flight all appear to have been filmed at the same time. The aircraft takes off in darkness, and a reel later the sun is dipping in the horizon.

It's far from the worst of the Airport spinoffs; The Concorde wins that distinction hands-down. The only saving grace in any of the sequels is Albert Whitlock's superb matte paintings in Airport '77. But if cheap laughs are what your in the mood for, it doesn't get much cheesier than Airport 1975.

Recently I was thinking about some of lousy dvd's I've managed to pick up over the years, and the Airport Terminal Pack was the one that came to my mind first.

Oh yeah, and Zapped. Here's a clip with sausage missiles at the end.

I interviewed Willie Aames when this first came out. Thanks for the memory, Dot!

'A typical example of director Jack Smight's compositional tension at its tensest. George Kennedy is surrounded by enough side-room to park both sequels.'

I tried to find it, but couldn't. There's a classic clip of George Kennedy crying on Dallas that's funny as hell.

I can't find my favorite George Kennedy moment on YouTube - his exchange with Sylvia Kristel in "Airport 79: The Concorde":

Isabelle: You pilots are such... men. Capt. Joe Patroni: They don't call it the cockpit for nothing, honey.