Last night I gave my friend's son a guided tour of the 3 Stooges short, Three Loan Wolves. Dad walked in the second this enchantingly incorrect image hit the screen: 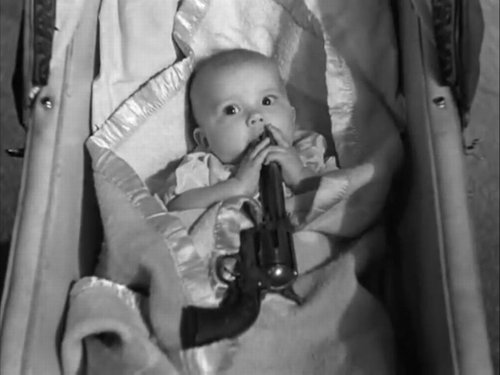 I still recall the hours it took for dad to snap this photo of me.

"That should be your Facebook profile photo," my pal added after the shock had subsided.

It was up before breakfast.

Gary Craig writes, "Whoever took this photo should be arrested. Not funny."

Too late. A hole was dug for Stooges cinematographer George F. Kelley long before I was born. Mr. Kelley was guilty of many cinematic infractions, Gary -- shadow abuse, crimes against lighting, etc. This is not one of them.

Really? Not at all? Not even a teensy-weensy bit irreverent?

You sound like the mean parents on the block who wouldn't let their kids celebrate the end of the school day by watching the boys.

Larry Teves notes, "They are so cute when they are packing...."

Good to see that at least one of you appleheads is in on the joke.

You forgot to mention that the shot is a punchline after one of the Stooges says, "Look, he stopped crying! I gave him the pacifier!"

Correct if I'm wrong but wasn't this gag recycled by the Stooges more than once?

Loaded gun A Stooge thinks that a gun isn't loaded and holds it at something, then fires the gun to prove that it's not loaded. However, it is loaded and a bullet comes out and shoots wherever or whoever he was pointing the gun at. Also used in: DISORDER IN THE COURT · SO LONG, MR. CHUMPS · BABY SITTERS JITTERS · HORSING AROUND http://threestooges.net/filmography/episode/93 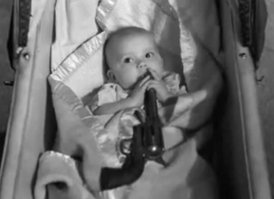 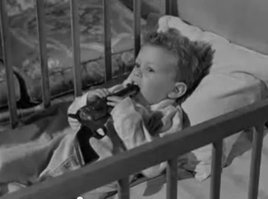