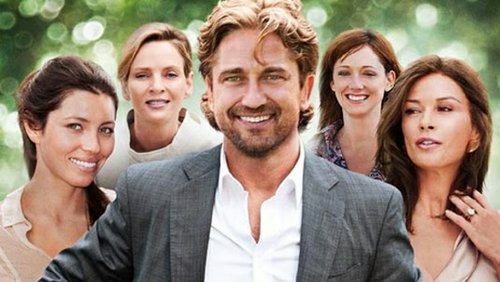 With the onslaught of a particularly weak season of Christmas films, you might want to check out a few of the more obsure finds playing our local art screens.

Matt was impressed by the "intimate but not sentimental, revealing but not exploitative" nature of Starlet, opening today at Landmark's Ken Cinema. Matt also scored an interview with the film's director, Sean Baker.

This week's "my gay dad" movie (Any Day Now opens next week) is a tad long on improvisational dialog, but In the Family, houses a markedly restrained tour-de-force performance by Patrick Wang, the film’s writer-director. It's a heartbreaker, but well worth your time. In the Family opens exclusively at UA Horton Plaza.

Two Catherine Zeta-Jones films open this week and at least one of them is reason enough to stay away from the multiplex. Lay the Favorite, which co-stars Bruce Willis, begins its exclusive engagement at Reading Cinemas Gaslamp 15. There were no screeners or advance screenings, so you're on your own.

Playing for Keeps, a new vat of Biel bile, opens wide today, but not wider than the exit door you'll run through after experiencing 10 minutes of the monstrously unappealing film. The film's highlight: Fox 5's Josh Board's mid-show cry of, "Hey! Could you take your noisy kid outta' here?" It didn't work, of course, but his form and delivery was spot on.

I'm very sad to see Albert Brooks in a Judd Apatow film: This is 40 (Should be called: This is My Wife's Movie or Albert Brooks Needs Money). Megan Fox gets higher billing than Brooks!! WTF!! Right now I've slogging through a Vanity Fair piece on Albert Brooks. The downside? Judd Apatow is the interviewer (lots of This is 40 drop ins, plus Judd has the nerve to act like he's on Brooks level of comedy). You know when Brooks has hit a lull when he has to work with Judd Apatow who is complete total twirp.

I can't comment, Dot, but you're on the right track. The world should be working for Albert, not the other way around.