SDSU sororities get in on the offensive party-wear action

First, there was UCSD's infamous Compton Cookout. Next came Cal State San Marcos's Cholas Chowdown, in which members of the school's Alphi Chi Omega sorority chapter posted photos to Instagram of themselves, "wearing bandanas and flannel shirts, and making gang-like gestures with their hands." (The incident was especially shocking in light of Cal State San Marcos President Karen Haynes' decision to cancel all “celebrations themed around ethnic and cultural background” after she was photographed in a sombrero and poncho at a campus fiesta party.)

Now the controversy has moved to San Diego State, where two separate sororities have come under fire for offensive party attire. First, there was Alpha Phi's Lucky Lei Luau, which featured sisters dressed as Hawaiian natives: 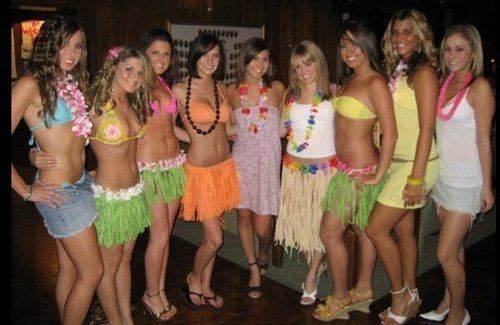 "Traditional hula dancer skirts ran from the waist clear down to the ankle," notes Hawaiian hula dance scholar Hula Dance. "These are nothing more than tarted up abominations, which do little but recall the sexual exploitation of native peoples by invading colonialist powers. These girls may not think they're supporting rape culture, but then, they probably don't think much about anything." 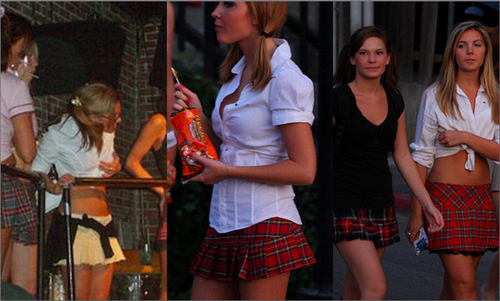 "The Catholic school girl uniform was created in order to foster genuine community," says noted Catholic school girl uniform expert Reginald Creep. "If everyone is dressed the same, then no one stands out because of the wealth or poverty expressed by their clothing. But now, it has been fetishized to the point where it suggests a different sort of communing. This is especially naughty given the Catholic emphasis on chastity, and further, given the fact that it has traditionally been attire designed for girls under the age of 18. These outfits are terrifically offensive."

"Gosh," said Pi Beta Phi Activities Director Pam Teadrop, "it seems like everything is offensive these days. At this rate, we're just going to have to party naked!"